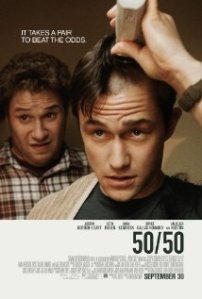 In the new movie, 50/50, seemingly healthy, 27-year-old Adam Lerner (played by Joseph Gordon-Levitt) discovers he has a malignant tumor in his spine. Suddenly he is faced with the realization that his odds of dying are about the same as his odds of living. He has a fifty-fifty chance. If this seems like a grim premise for a movie, it is, after all, a comedy.

Most of the humor in 50/50 derives from Adam’s best friend Kyle (Seth Rogen). While Kyle is crude and tends to make tactless (but funny) remarks, he has more substance than we at first thought. He knows what friendship is all about—he’ll stick with Adam through all the unpleasantness of his illness.

Adam has a shallow, live-in girlfriend named Rachael (Bryce Dallas Howard) who says at the outset that she will stick with him, but we see right away that she probably isn’t going to last. She seems to care for Adam, but not enough to always be around when he needs her. Adam has never learned to drive a car so he has to depend on Rachael—or somebody—to drive him to his chemotherapy sessions.

Adam’s difficult but loving mother (Anjelica Huston, in what must be her best role in years) doesn’t take the news of her son’s illness very well. There always seems to be an argument about to erupt between mother and son. He won’t return her calls; she doesn’t seem to like it that she doesn’t have much control over him anymore. Adam’s Alzheimer’s-afflicted father doesn’t know much of what’s going on.

Adam’s newly minted therapist, Katherine (Anna Kendrick), sees that Adam is emotionally distant and longs to help him, but she doesn’t seem to know how. He is, after all, only her third patient. She knows all the textbook terms for everything, but she is as lost as he is. She lectures him on what’s “normal” for people in his situation.

Despite its grim subject matter, 50/50 will not leave viewers feeling sad or depressed. While there are some heartrending moments, the message here is humor, courage and acceptance of the inevitable—rather than tears.