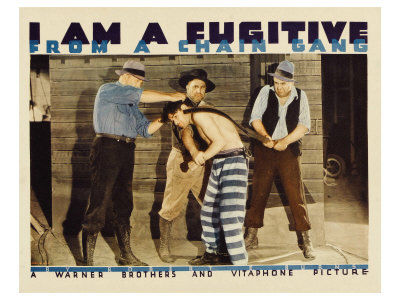 Most of us will never know what it’s like to be in prison. We have the movies, though, and through them we can get a glimpse of what life behind bars is really like. Prison movies have long been a staple of American films and they remain enduringly popular because they’re entertaining and full of human interest. Most of them are well-made and the better of them not only tell a story but have an underlying message, such as “the system is corrupt and needs to be reformed,” or “decent people are made indecent if they’re kept locked up long enough,” or “no matter what happens, you gotta have hope.” Here is my list of memorable prison pictures:

The best “women behind bars” movie ever. Naïve young woman (played by Eleanor Parker) must learn the harsh realities of prison life when she’s sentenced to a stretch behind bars for her part in a forty-dollar robbery. To make matters worse she’s expecting a baby, which is taken from her as soon as it’s born in prison. In the end, the system fails her. When she’s finally released years later, she’s no longer her sweet young self. She has become hardened and has picked up a few tricks from the despicable cons she came to know in the jug. She’ll be back!

What would prison movies be without James Cagney? He plays a reporter named Frank Ross who is framed for a crime he didn’t commit after he writes a story about corrupt city politicians. He thinks he’ll prove his innocence and walk out of the jail a free man, but the system doesn’t work in his favor. He begins to give in to despair until he meets fellow inmate Hood Stacey (played by George Raft), who just might hold the key to his release. One of the best of the Warner Brothers prison dramas of the 1930s.

Seminal prison drama that set the standard for other prison pictures that followed. Weak-willed 24-year-old Kent Marlowe (played by Robert Montgomery) is sentenced to ten years in prison for manslaughter. He has two seasoned cons as cellmates: “Machine Gun” Butch Schmidt (played by Wallace Beery) and John Malone (Chester Morris), a decent fellow who got all the wrong breaks. Kent Marlowe has a difficult time adjusting to prison and can’t seem to learn the appropriate conduct to get along. He is responsible for John Malone losing his parole, but John Malone escapes and falls in love with Kent’s sister. Malone is recaptured and returned to prison in time to participate in a daring breakout attempt. The movie that started the “life behind bars” genre.

Parody of “The Big House,” released the year before. During Prohibition, Stan Laurel and Oliver Hardy (in their first full-length feature film) decide they’ll become bootleggers, and the result is that they end up in behind bars. Stan has a buzzing tooth that causes him no end of trouble but earns him the respect of a tough prison inmate named the Tiger. Stan and Ollie manage to escape and end up in black-face as workers on a Southern plantation. (Ollie sings “Lazy Moon.”) A chance meeting with the warden (and his daughter) from the prison they escaped from results in their being sent back. Their part in thwarting an escape attempt, however, earns them a parole.

Westgate Penitentiary is run by a brutal, music-loving guard named Captain Munsey (played by Hume Cronyn). The inmates fear him and hate him. He has been responsible for the death of more than one prisoner. He has met his match, though, in tough inmate Joe Collins (played by Burt Lancaster). When Joe Collins and others are assigned to hated drainpipe detail as punishment, they plan a daring escape attempt, storming the prison tower as though they’re fighting a war. These things never work out, but, as horrible as prison life is, you can’t blame them for trying. Maybe they’d rather try to escape and die trying than to spend all their days behind bars.

Alcatraz prison was for the most hardened criminals and was thought to be escape-proof—and it was—with one notable exception. Clint Eastwood plays Frank Morris, the one inmate who, in 1962, successfully escaped from Alcatraz. (Anybody else who ever tried it died in the attempt.) Frank Morris happens to be just a little bit smarter than everybody else. Through an elaborate ruse and after months of planning, he successfully escapes the island prison. No traces of him were ever found. Makes you believe that, with enough determination, anything is possible.

Andy Dufresne (played by Tim Robbins) is sentence to life in prison for killing his wife and her boyfriend. Is he guilty or isn’t he? As terrible as prison is and as hopeless as his life may seem, he never loses hope. He was a banker on the outside and, after he has been in prison for a while, he ingratiates himself to the corrupt warden by running his illegal money-laundering operation. Over the years, through his cunning, he devises an elaborate scheme to not only escape from prison but to escape the country so he’ll never be caught and sent back. He bankrolls his life as an escapee by embezzling funds from the slimy warden. Once he is free, he meets up in Mexico with a fellow inmate whom he befriended in prison named Ellis “Red” Redding (played by Morgan Freeman). This is an unusual prison movie in that the protagonist is successful in escaping. He beats the system, something that doesn’t happen very often.

Susan Hayward took home Oscar gold for her role as real-life Barbara Graham, a good-time party girl who gets mixed up with the wrong crowd. She gets all the wrong breaks, ends up being charged with murder, and is sentenced to die in the gas chamber. If things had gone just a little differently for her, she could have been a decent mother and had a decent life. The final scenes are harrowing and touching. Not for the squeamish. Susan deserved her Oscar.

A prison picture with a dash of fantasy. Tom Hanks plays a sympathetic guard in a death row cellblock. John Coffey (played by Michael Clarke Duncan) is not like the other prisoners. He’s set to die in the electric chair for a double murder that another prisoner committed. The most interesting thing about him, though, is that he has healing powers. He heals the guard of a kidney infection. He restores a pet mouse that has been crushed to death. He heals the wife of the warden who has a brain tumor. A memorable movie based on the Stephen King serial novel.

The thirties was a great decade for prison movies and for movies in general. In this gritty Depression-era prison drama, Paul Muni plays a decent fellow who just happens to be in the wrong place at the wrong time. For his unwitting participation in a diner holdup, he’s sentenced to a stretch in a nightmarish chain-gang prison, where inmates are routinely beaten, over-worked, and mistreated. He manages to escape but is betrayed by a jealous woman and returned. He is ultimately double-crossed by prison officials and ends up spending a lot more time in prison than he bargained for. Seems you can’t trust anybody. An exposé of the brutal prison system and a seminal classic film from Hollywood’s early Golden Age.

Paul Newman plays Luke, a likeable ne’r-do-well who ends up in a Southern chain-gang prison, where convicts must work all day in the heat building roads. Luke wins the hearts of the other prisoners, but he just doesn’t handle authority very well and can’t seem to abide by the strict rules of the place. Things don’t go well for him. He tries once too often to break out of prison, with tragic results. A classic “one man against the system” story.

Based on a true story. Young American Billy Hays (played by Brad Davis) attempts to smuggle a small amount of hashish out of Turkey to sell to his friends when he gets back home. He is caught before he can leave the country and is sentenced to three and a half years in a hellish Turkish prison, where prisoners are routinely tortured and live in conditions that make American prisons look like country clubs. When he has less than two months to go on his sentence, the Turkish court decides to change his sentence to a life sentence–seems they want to make an example of him. Never mind prisoners’ rights because they don’t have any. The lesson here is simple: Don’t try to smuggle drugs out of Turkey, even small amounts. You already knew that, though, didn’t you?