Our Gang ~ Those Were the Days 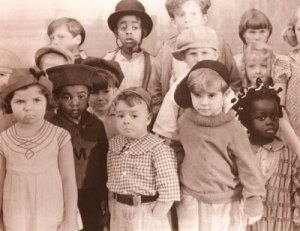 Our Gang ~ Those Were the Days

When I was in grade school, my favorite thing to do after school was to go home and watch The Little Rascals on TV. In my opinion, it was by far the best thing on TV. It was on every afternoon from four o’clock to five o’clock. The grownups weren’t usually home from work yet by that time, so most of the time I could watch undisturbed.

It started out as Our Gang in the 1920s, a series of short films made to be shown in movie theatres. (There wasn’t any TV yet.) In those days, when you went to the movies, you saw, in addition to the main attraction, at least one cartoon, at least one short subject, previews of coming attractions, and whatever else theatre managers wanted to throw at you. The Our Gang shorts, most of them 18 to 20 minutes long, were made to be shown as part of the “program” in movie theatres, as were the Laurel and Hardy shorts, the Three Stooges, and many others.

When the Our Gang comedies began being shown on TV as a series in the 1950s, they were known as The Little Rascals. The name was changed for copyright reasons; MGM studios owned the rights to the Our Gang trademark.

When producer Hal Roach originated the Our Gang series in 1923, his approach was that kids should be shown as kids really are, instead of pint-sized versions of adults. This naturalistic approach, with black kids and girls and boys all being portrayed as equals, was something that had never been done in movies before and became the hallmark of the series. The kids were mostly poor, rather than affluent, and were often at odds with tough kids, smart-aleck kids, or adults who didn’t understand them or who were, for one reason or another, unkind to them. There was always lots of slapstick, lots of heart and innocence, and more often than not a touch of sentiment thrown in. At least one of the characters had a crying scene in every film.

The kids who appeared in the Our Gang shorts were generally just sweet-faced regular kids instead of polished, professionally trained actors. And with unforgettable names like Farina, Chubby, Weezer, Spanky, Alfalfa, Stymie, Buckwheat, Porky, Darla, Butch, Woim, Waldo, Sherwood, and Buckwheat, they were kids we all knew (or wished we knew) and identified with.

Of the animals who appeared in Our Gang, the most well-known was Pete the Pup, an American pit bull with a ring around his eye and an expressive face and sympathetic manner. When one of the characters cried, he usually cried too.

The earliest Our Gang shorts were made during the silent era, but when movies began talking in the late twenties, the series moved smoothly into sound production. Our Gang was immediately profitable and continued production until 1938, when it was taken over by MGM and continued (less memorably) during the war years with a different approach and a different cast of child characters. In all, 220 short-subject films, silent and sound, were produced. Over 80 different kids played the parts through the years. When a kid became too old for the character he was playing, he was easily replaced with a younger kid.