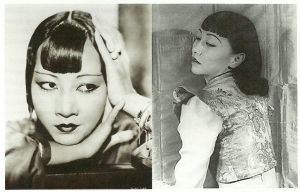 Of the many unique screen personalities that Hollywood gave to the world during the 1920s and ‘30s, one of the most compelling was Anna May Wong. During her long and varied career, she worked in both sound and silent films, on the stage, in radio, and on television.

A third-generation Chinese-American, Anna May Wong was born Wong Liu Tsong in Los Angeles in 1905 to a laundryman and his wife. At an early age she became infatuated with the movies and began acting in films. During the silent era she appeared in “The Toll of the Sea” in 1922 (one of the first color films) and opposite Douglas Fairbanks in “The Thief of Bagdad” in 1924. She became a fashion icon and by the age of 19 had achieved international stardom.

Frustrated with being typecast in 1920s Hollywood, she left for Europe where she found plenty of acting work. During the next few years she split her time between the United States and Europe, appearing in such films as “Daughter of the Dragon” and “Daughter of Shanghai.” In 1932 she appeared opposite Marlene Dietrich in the memorable train-bound saga, “Shanghai Express.”

In the mid-1930s she wanted to play the lead in the upcoming film production of “The Good Earth,” based on the famous novel by Pearl S. Buck about Chinese peasant life, but studio executives refused to even consider her for the part, saying she didn’t conform to the occidental view of what an oriental woman should look like. The part went instead to non-Asian actor Luise Rainer, who went on to win an Academy Award for best actress for her portrayal.

During the late 1930s, Anna May Wong starred in several “B” movies for Paramount studios, in which she gave positive portrayals of Chinese-Americans.  She paid less attention to her acting career during World War II, choosing instead to devote her time and energies to helping the Chinese cause against Japan. After the war, she returned to the public eye with appearances on the emerging medium of television. She became the first Asian actor to have her own television series in 1951, called “The Gallery of Madame Liu-Tsong.”

She was planning a return to films with an appearance in “The Flower Drug Song” in 1961 when she died of heart disease at the age of 56. For decades after her death, she was remembered mainly for her stereotypical screen performances, but in recent years she has gained new appreciation for her lilting speaking voice, her beauty and poise, and her unique contribution to film.