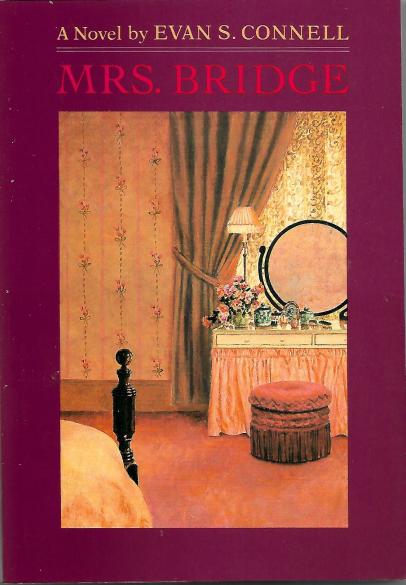 Mrs. Bridge, the superb novel by Evan S. Connell (1924-2013), was first published in 1959. It is a classic of realist fiction, a piece of Americana, an indelible portrait of the kind of Midwestern American woman who lived in the 1940s and who no longer exists. (The companion piece to Mrs. Bridge, titled Mr. Bridge, was published ten years later.)

India Bridge is a Kansas City “country club matron” of the 1940s. She is married to Walter Bridge and they have three children: Ruth, Carolyn (Corky) and Douglas. Walter is an attorney and he is busy, busy, busy all the time to make enough money to “take care of” his family. In fact, he believes that “providing” for them is much more important than spending time with them or showing them he loves them (even though he does love them). He works from morning ‘til night and sometimes when he gets home all he can do is fall into bed to rest up for the next day of work. (Do we detect a heart attack in the making?)

Walter and India Bridge are “well to do” rather than rich. They have enough money for just about anything. They live in a lovely house and have two cars; they belong to the country club and they have plenty of snooty friends. They can afford a tour of Europe, which they are enjoying until the Nazis invade Poland and they have to go back home.

Mrs. Bridge can afford a maid to run the household, do the cleaning, shopping, laundry, cooking, etc. The maid’s name is Harriet and she is both a blessing and a curse to Mrs. Bridge. She is efficient, but in the very fact of her efficiency she places Mrs. Bridge in a dilemma because it leaves her (Mrs. Bridge) with plenty of time to try to find something to do and think about the past when she had to do all the housework herself and her three children were little and needed her.

One of Mrs. Bridge’s endearing qualities is that she is “traditional” and resistant to change. As her three children grow to adulthood, she is frequently baffled and hurt by their behavior. Her son, Douglas, is aloof and secretive. When she finds a naked girly magazine in his dresser drawer, she burns the magazine and gives Douglas an old-fashioned marriage manual from when she herself was young. The older daughter, Ruth, is something of a bohemian and nothing like her mother. She leaves home as soon as she can and goes to New York to work and become a libertine, unashamedly “sleeping” with a number of different men that she doesn’t care about. The younger daughter, Carolyn (Corky), goes off to college and finds an “inappropriate” man that she wants to marry. Mrs. Bridge must accept the fact that Carolyn’s husband’s father is a low-class plumber instead of a doctor or a lawyer. Carolyn soon finds herself with a baby and discovers that that she “can’t stand” the man she’s married to.

Mrs. Bridge is a slice of life, a chronicle of a specific time in twentieth century American life, an engrossing account of  the small moments that make up a life. India Bridge is a conflicted character: a woman with all the material comforts to make her happy but with plenty of reasons not to be happy. By the time you reach the end of the novel, you will have the feeling that India Bridge not only a character in a book but a person you know, or have known, intimately.