The Praise Singer ~ A Capsule Book Review by Allen Kopp

Simonides of Keos was a real-life lyric poet who lived in ancient Greece from 556 B.C. to 469 B.C. The Praise Singer is a 1978 historical novel by Mary Renault (real name Eileen Mary Challans). Though fiction, The Praise Singer is a biography of sorts based on the life and times of Simonides, and is narrated in his first-person voice. Simonides experienced during his lifetime a flowering of the arts in ancient Greece, especially in poetry and the written word. Up until that time, poetry and literature had mostly been an oral tradition. Simonides was possibly the first person to set down the works of Homer (The Iliad, The Odyssey) in writing.

Simonides has an unusually long life for his time. He is telling the story as an old man in his eighties. He has much to tell, including lots of political intrigue and associations with some of the great and celebrated people of his age. He is so accomplished at his art (a traveling singer, a bard, a performer of his own poems) that he himself becomes a celebrity through his talent rather than good looks, which he didn’t possess. He never marries and has no children but raises his nephew as his own son and teaches him to follow in his footsteps as a traveling bard and poet.

Simonides is brought up in strict discipline by his father, Leoprepes. He finds encouragement in the love of his handsome older brother, Theasides, and in music. When he meets a traveling musician and performer, Kleobis, Simonides persuades him to take him on as an apprentice. Under Kleobis’ tutelage he becomes a talented composer and performer. He attempts to find a patron at the court of Polycrates in Samos but is held back by his lack of physical beauty.

Simonides then finds a patron in Peisistratos the tyrant (a word that has a different meaning now than it did then) of Athens. He becomes a successful musician and after Peisistratos’ death, his sons Hippias and Hipparchos continue the family’s patronage. Through Hipparchos, Simonides is introduced to the prostitute Lyra, whose lover he becomes. Hipparchos sexually favors boys over women, and as the novel concludes we witness his eventual downfall as he uses his political power to punish the family of a young boy who rejects his advances. The boy and his lover retaliate by murdering him.

If you are a fan of historical fiction and the works of Mary Renault, then you will probably like The Praise Singer. I found it rather tedious at times and was glad when I came to the end. There are a lot of characters coming and going all the time and their names are not always easy to keep straight. When you stop reading the novel and then pick it up again, neither is it always easy to remember what happened the last time you read because it wasn’t that interesting to begin with. It’s best when reading a book like this to consider the whole rather than the parts. It could have used some judicious editing and restructuring to juice it along. 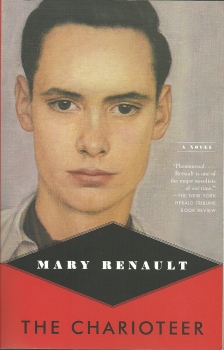 The Charioteer ~ A Capsule Book Review by Allen Kopp

English writer Mary Renault (1905-1983) is known mostly for her historical fiction set in ancient Greece. Her 1953 novel The Charioteer, however, is set in a much different time period: World War II. Young British soldier Laurie (Laurence) Odell sustains a severe leg injury (his kneecap is blown off) in the Dunkirk evacuation in 1940. While recuperating in an army hospital from a series of operations on his leg, he meets Andrew Raynes, a Quaker and a conscientious objector. (These “COs” are very unpopular with most people.) Andrew doesn’t fight in the war because of his religion, but he’s doing “war work” as a hospital orderly. Andrew and Laurie Odell become friends, they begin to meet secretly every day and, after a time, they become more than friends.

Years earlier, when Laurie was in school, he was drawn to an older boy named Ralph Lanyon. Ralph was a “Head” (sort of a student leader) at the school. After Ralph is “sent down” at school (expelled), Laurie never sees him again but never stops thinking of him. Fast forward years later to the war: Laurie and Ralph meet again; it turns out that Ralph rescued Laurie at Dunkirk, even though Laurie was barely conscious at the time and wasn’t aware of what was going on. Not surprisingly, he still is drawn to Ralph in a sexual way and he discovers that Ralph feels the same way about him. Since Laurie has already committed himself in a way to loving Andrew, he is faced with a dilemma. Who needs him more, Andrew or Ralph?

Meantime, Laurie has family problems. His mother, who has been a widow since Laurie was five, is planning on marrying a vicar named Mr. Straike. Laurie and Mr. Straike don’t like each other very much and are at pains to keep it hidden.  Mr. Straike was instrumental in having Laurie’s eleven-year-old dog, Gyp, euthanized while Laurie was away and his mother didn’t bother to tell Laurie about it until he comes home for her wedding. He swallows his grief over losing Gyp and ends up giving his mother away in her wedding to Mr. Straike. Whenever Laurie is alone with his mother, he wants to tell her of his homosexuality and of his feelings for Andrew, but he is never able to get the words out; he knows that Mr. Straike would violently disapprove.

The more Laurie sees Ralph on his leaves from the hospital for treatment, the more he sees him a different light. Ralph is a member of an insular group of gay men, whom Laurie doesn’t like very much. (They’re plenty bitchy and one of them attempts suicide while Laurie is present.) Although Ralph is talking about him and Laurie being together forever, Laurie isn’t sure that’s what he wants, especially since Andrew has come into his life.

The Charioteer is interesting fiction for its time, the early 1950s. If the plot creaks at times (especially for the American reader) in the long, long conversations in the second half and we’re not always sure what the characters are saying, we can overlook the plodding and the occasional flaws. (Who doesn’t have them?) On the whole, it’s a rather conventional wartime love story made unconventional because all the participants are men. Despite its theme, however, it’s easy on the ears and eyes for those who might be offended by descriptions of an “alternative lifestyle.” The sections dealing with any kind of love or sexual activity are very chaste. For all we know, Laurie and Ralph or Laurie and Andrew might be playing chess when they are alone together. We know what’s going on here, but we’re not hammered over the head with it. This is what is known as subtlety and artistry, two qualities sorely lacking in today’s tell-all, anything-goes culture. 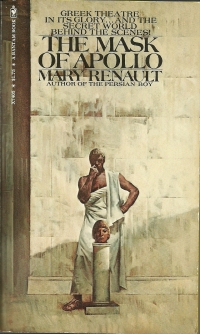 The Mask of Apollo ~ A Capsule Book Review by Allen Kopp

Mary Renault’s 1966 novel, The Mask of Apollo, is historical fiction, based, in large part, on historical fact. The main character is Nikeratos (“Niko” to his friends), an Athenian actor who is relating the story in his first-person voice. Nikeratos is a fictional construct, but most of the other characters and incidents, including a very young Alexander the Great at the end of the story, are real.

The setting is Greece about four hundred years before Christ. Nikeratos, being the son of an actor, is born into acting. He finds success in his calling early in life and moves up through the ranks of desired actors. To me the most interesting parts of the novel are the descriptions of the stagecraft of the period, which, even by today’s standards, were very elaborate and sophisticated. Plays were the entertainment of the masses, instead of just the cultured few. Theatres seated as many as fifteen or twenty thousand people and plays often began before dawn, with the rising sun sometimes used as an effect in the play. Only men were allowed to act on the stage, so men played in women’s roles. People in the audience never saw the faces of the actors during a performance because they wore elaborate masks (mask-making was a craft in itself). Underneath the masks the actors spoke the lines the playwrights had written. The best and most successful actors became celebrated.

If Nikeratos’s life isn’t interesting enough as an actor, he becomes involved in political intrigue in Syracuse, a powerful Greek city state at the tip of the island of Sicily. Syracuse has been controlled by despots, first by Dionysius, and then after his death by his son, Dionysius the Younger. Nikeratos befriends Dion, a moderate politician and pupil of the philosopher Plato. (They never become “lovers” in the Greek sense because they are of different worlds, but there is definitely an attraction going on there.) Dion is trying to bring stability and democracy to Syracuse by teaching Dionysius the Younger about more tolerant forms of government. Dion entrusts Nikeratos to convey sensitive political documents between Syracuse and Athens. Plato and Dion attempt to restructure the government of Syracuse along the lines of Plato’s Republic, with Dionysius the Younger as the archetypal philosopher-king. Of course, things don’t work out the way they had hoped.

The Mask of Apollo is a readable classic, somewhere between pop fiction and literature. It’s plenty engaging enough, but for me the political intrigue began to grow thin and meandering toward the end of the book. History tells us that things didn’t end well for Plato and Dion, but the last hundred pages or so seemed kind of anticlimactic. It might have been gripping but isn’t. All in all, though, it’s an interesting and informative journey to the ancient world, an escape from the dreary times we live in.