Roanoke, Solving the Mystery of the Lost Colony ~ A Capsule Book Review 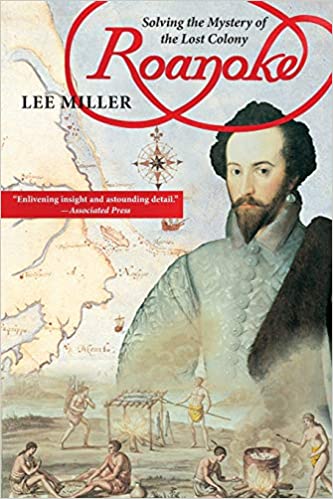 Roanoke, Solving the Mystery of the Lost Colony ~ A Capsule Book Review by Allen Kopp

During the long reign of Queen Elizabeth I of England (1558-1603), there were malcontents—religious dissenters and Separatists—who didn’t like their country and wanted to live elsewhere. England was overcrowded, disease-ridden, and becoming more and more libertine and loose in its values. Constant religious fighting raged among Catholics, Protestants, and Church of England. The New World, which meant the North American continent, beckoned. It was largely untouched and contained unlimited land and unimaginable natural resources, which would translate into wealth, power and prestige. Every European power wanted to be the first to claim this prize.

In 1587 a group of 115 colonists set out for the New World. Their destination was the Chesapeake Bay, but they ended up on Roanoke Island off the coast of what is today North Carolina. Roanoke Island was completely unsuited for colonization. The colonists believed they would, in time, be relocated to a better place. They were essentially abandoned, cast off, sacrificed. What was going on here? Their leader, John White, set off to England to get help (the voyage across the Atlantic took about four months). He promised to return as quickly as he could with supplies and whatever help was needed. He had a personal interest in the venture because his daughter was among the colonists. When he returned to Roanoke Island three long years later, there was not a sign of the 115 colonists. They seemed to have vanished, along with their houses and any other trace of them. What could have happened to them? Were supernatural forces at play? It’s a mystery that has endured for four hundred years.

In the nonfiction book, Roanoke, Solving the Mystery of the Lost Colony, author Lee Miller lays out a compelling case that the 115 Roanoke colonists were sabotaged by someone who didn’t want the venture to succeed. Who could that someone be? There were only a few men in the government powerful enough to pull off such a scheme. Lee Miller narrows it down to Walsingham, powerful member of the queen’s Privy Council. Walsingham despised the upstart Sir Walter Raleigh, who had become the queen’s favorite. If the colony had been a success, it would have been in a feather in Raleigh’s cap. If it failed, it would cast a pall over Raleigh’s career from which he might never recover.

Several rescue attempts were launched to save the 115 colonists stranded on the inhospitable Roanoke Island, but all of them failed or were scuttled by co-conspirators who were in on the plot. The 115 colonists were left to die, to fade away, to succumb to disease and starvation. And why was their fate such a mystery over all the centuries? Why was the public left to believe that the colonists simply “disappeared?” They didn’t just disappear; they were sacrificed and then the truth was covered up. If the truth had been told, it would have been very bad publicity for colonization in the New World.

Roanoke, Solving the Mystery of the Lost Colony is a minutely and meticulously detailed account of the feckless and ill-advised Roanoke Colony, of the treachery and political machinations that made the venture the failure it was. The message is simple: powerful politicians will screw over anybody they can, will double-deal their way into hell, and then lie about it to make sure the truth is never known. Sound familiar?