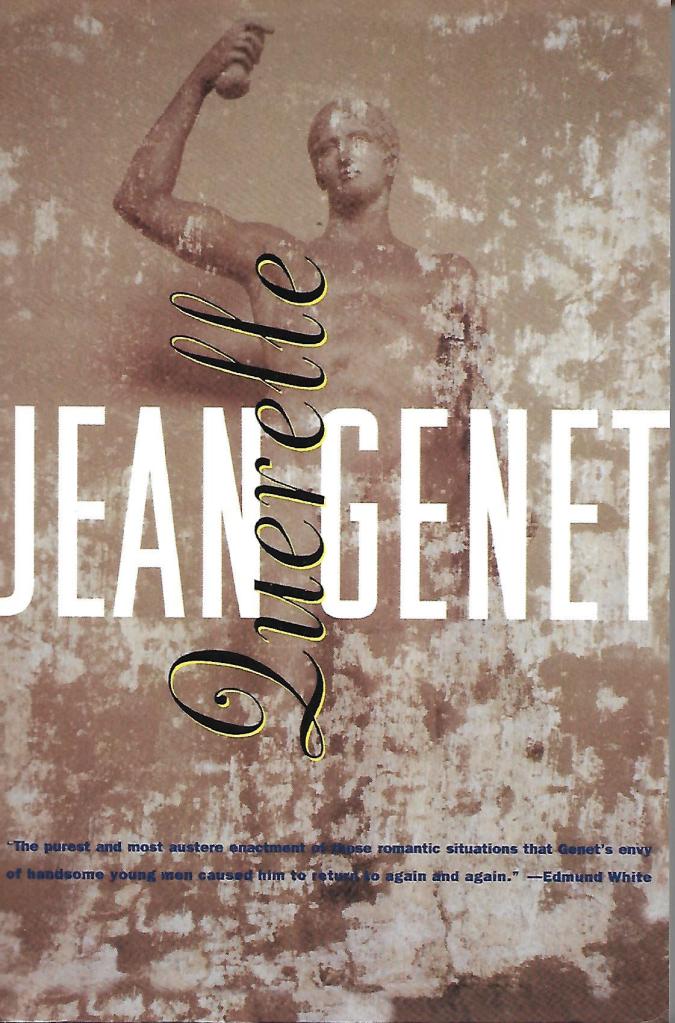 “The notion of murder often brings to mind the notion of sailors and the sea.” This is the opening sentence of the novel Querelle by French author Jean Genet (1910-1986). Querelle (also known as Querelle de Brest) was written in 1945 and published anonymously in 1947. It was controversial for the 1940s (thus the anonymous publication), involving, as it does, homosexuality, murder, romantic obsession and prostitution.

Georges Querelle is a young, muscular, good-looking French sailor, in the French seaport town of Brest where the action of the novel takes place. His good looks make him a sort of magnet for almost anyone who sees him. His being a sailor and moving around from place to place makes him able to escape detection for the murders and thefts he commits. He has a look-alike brother, Robert, who is a gigolo in the local brothel in Brest called La Feria. There is this persistent theme running throughout the novel of the two brothers, Querelle and Robert, being so much alike that the love they have for each other is self-love, and the two brothers are, in fact, one and the same person.

The only female character in the book is Madame Lysiane. She is the madame of the Brest brothel, La Feria; Robert, Querelle’s brother, is her lover. Madame Lysiane is married to the owner of the brothel, whose name is Nono. Nono likes to roll dice with the young sailors who frequent his establishment. If Nono wins the throw of the dice, he takes the sailor into the back room and has sex with him. In this way, Querelle becomes Nono’s lover.

Lieutenant Seblon is an officer on the ship that Querelle serves on. He keeps to himself as much as he can and confides to his diary how much he loves, and lusts after, Querelle. Querelle figures out that Lieutenant Seblon loves him and, with this knowledge, exercises a sort of control over him. Lieutenant Seblon imagines scenes in which he and Querelle are in love and live together always.

Querelle is a walk on the wild side, a dark excursion down a fog-enshrouded alleyway. There’s nothing romantic about it, or charming or uplifting; it’s the dark side of human nature. Querelle might be thought of an agent of the devil with the face of an angel and the body of a god. People are drawn to him for his beauty, often at their own peril. He’s pretty poison. He has no equal in twentieth century literature. 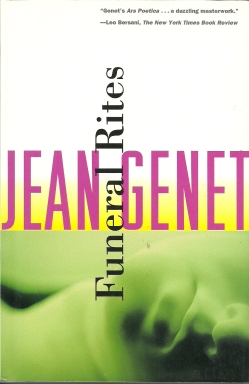 Funeral Rites by Jean Genet (1910-1986) is set in France at the end of World War II when France was ridding itself of German occupation. There were some French people, mostly teen boys and men in their early twenties, who collaborated with the Germans against their own country. They positioned themselves on rooftops and functioned as snipers, shooting at Frenchman who were fighting for, or loyal to, France. These collaborators were naturally hated by the French.

Jean G. is narrating Funeral Rites. He confusedly switches from third person to first person and back again, so we don’t always know who’s who. He also switches back and forth in time, so he eschews the structure of the “traditional” novel. His twenty-year-old lover, Jean Decarnin, has been killed by one of the Frenchman who was acting as a German collaborator. Jean G.’s grief at the loss of Jean Decarnin drives the narrative. He sees a newsreel that shows a young French collaborator who is caught and the punishment that is meted out to him. Jean G. “imagines” the collaborator’s name is Riton. He is seventeen years old and, in Jean G.’s words, he is “beautiful.” Thereupon, the story (what there is of it) is about Riton and the young German invader, Erik Seiler, with whom Riton becomes infatuated. It seems at times that Riton and Jean G. are one and the same.) Riton claims to love Erik, even though Erik is the invader, the rapist, the occupier, the oppressor. (Genet constantly reverts to the theme of how sex and death are intertwined.) Erik is also the lover of Jean Decarnin’s mother, a silly Frenchwoman who doesn’t seem to care that she is consorting with the enemy. She doesn’t care very much that her son has been killed, either.

Jean Genet was born without a father to a prostitute, who gave him up for adoption when he was a few months old. Early in his life, until he turned to writing, he was a vagrant and petty criminal and spent much of his time behind bars. Funeral Rites is partly autobiographical and reflects Genet’s nontraditional approach to life. He is now considered a giant of twentieth century French literature. His other important works include Our Lady of the Flowers, Querelle and The Thief’s Journal.

Funeral Rites was first published in 1947 and wasn’t translated into English until 1953. At 256 pages, it’s challenging to read but not overly difficult, as long as you’re not bothered too much by the nonlinear structure. It’s often distasteful, as in the episode with the cat, but also has some flashes of humor, as when Jean Decarnin’s “stout” mother releases her bodily “wind” into the air of her boudoir. Most readers will find the sexual content (between men) mild by today’s standards. If you were going to be offended by that, you wouldn’t be reading this book anyway.