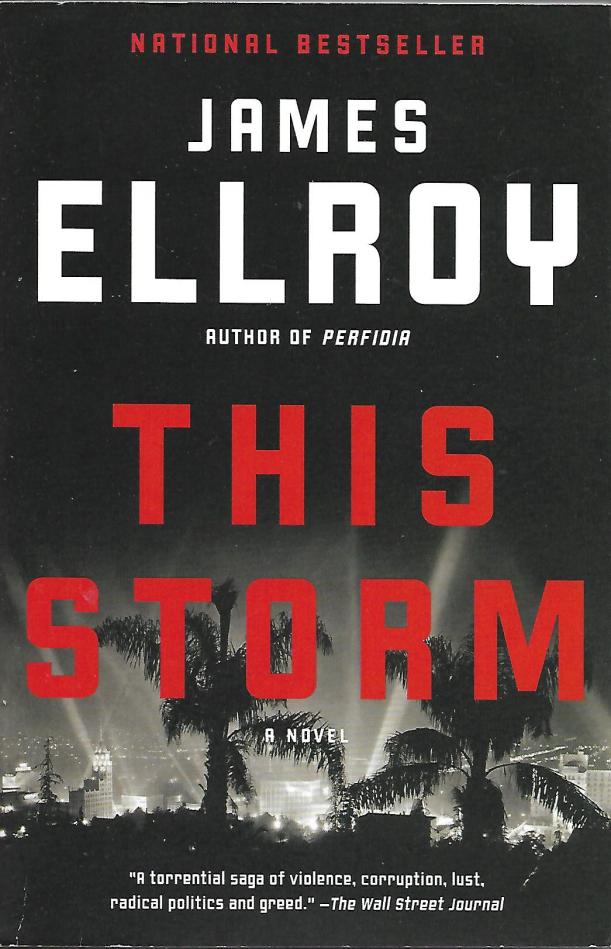 James Ellroy’s noir-mystery novel, This Storm, is set in and around Los Angeles in the early days and months of World War II. It is a time of rainstorms, blackouts, fear, paranoia, murder, suicide, racial unrest, Nazis, fascists, European refugees, Japanese internment camps, police corruption, cover-ups, violence, prostitution, promiscuous sex, and Simons Drive-in, where you can get a fantastic cheeseburger and a pineapple malt served by a floozy carhop.

This Storm is a gargantuan novel, almost 700 pages. If you are familiar with James Ellroy’s writing style, you know he doesn’t write like any other writer. “If you want political correctness, you’ll have to go someplace else,” he plainly states. He uses racial epithets the way other writers use adjectives. In short, there is nobody else quite like him. His style is choppy, with lots of slang expressions, punchy chapters, lots of tough-guy language and hair-trigger violence. We see the bad-boy cops in The Storm kill “suspects” they are pursuing when nobody is looking or pound them in the head with the massive LA phone directory while they are “interrogating” them. The war has unleashed all of men’s (and women’s) worst instincts, it seems. Almost all the characters The Storm are horrible people. Some are worse than others. These people are beyond redemption, but they also make for entertaining reading.

Of all the many dozens of characters in The Storm, you might say that police lieutenant Dudley Smith is the principal character. He is an Irish immigrant who killed many British soldiers in his homeland before coming to America, a “shit-heel,” a self-serving, arrogant, corrupt, lying, cheating bastard with the looks and savoir faire the ladies toss their panties over. In Baja during the war, he’s involved in several nefarious and illegal enterprises, such as “selling” Japanese laborers to the highest bidder. If he was ever called to ground, he could be locked up in prison for many lifetimes for all his transgressions. Nothing seems to touch him, though.

Hideo Ashida is the most interesting character in the novel. He’s a Japanese-American, working as a forensic chemist for the Los Angeles Police Department. As a Japanese man, he is spit at and reviled in the days after Pearl Harbor. He is a homosexual and is believed to be in love with Dudley Smith, flaws and all. They have a special kind of man-to-man friendship, which Hideo knows will never be realized sexually.

There are many other characters, sometimes so many of them that it’s hard to keep them all straight and remember their names; some of them are, by necessity, one-dimensional. Barbara Stanwyck, Ellen Drew, Orson Welles and symphony conductor Otto Klemperer are real-life characters among all the fictional ones. (If these people weren’t all dead, they might have grounds for legal action based on the way they are portrayed here.)

This Storm is a follow-up to the earlier novel Perfidia. These two novels are the first two parts of James Ellroy’s Second LA Quartet. (You remember the First LA Quartet, don’t you?) We will be eagerly awaiting the third novel, which, we presume, will pick up where This Storm leaves off. 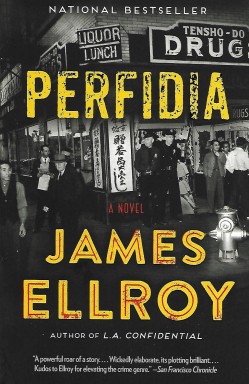 Writer James Ellroy is unapologetically politically un-correct. If you are offended by racial slurs and blunt sex talk, he is not the writer you should be reading. He manages to insult almost every ethnic and niche group. He gets away with it, it is assumed, because all his novels are set in the not-too-distant American past, where racial prejudice and racial slurs were much more a part of everyday discourse than they are now. “If you’re looking for political correctness,” Mr. Ellroy says, “go someplace else.”

His big (almost 700 pages) novel Perfidia (a Spanish word meaning betrayal or treachery) is set in Los Angeles in the days following the Japanese attack on Pearl Harbor in December 1941. With all those Americans dead in Hawaii and with the country now at war, fear and unease—and in some cases, hysteria—are the order of the day. The west coast of California seems the logical place that the frighteningly aggressive “Japs” will attack next. And those mandatory blackouts don’t do anything to ease peoples’ fears, either. (Imagine moving through a big city at night with all the lights turned off.)

The Japanese people in the Los Angeles area are being rounded up, no matter how innocent or blameless they are. Their property is being confiscated and they are being housed in “internment” camps. Americans are so anti-Japanese because of Pearl Harbor that they want to kill or at least defile almost every Asian they see. (Most people can’t tell the Japanese from other Asians). It’s in this atmosphere of fear and distrust that Perfidia is set.

Dr. Hideo Ashida is an Americanized Japanese. He is a brilliant forensic chemist employed by the Los Angeles Police Department. When all the Japanese people on the city payroll are canned just because of their ethnic background, Dr. Ashida manages to hold onto his job because he is so good at solving crimes. (He is, of course, called Charlie Chan and Mr. Moto, but he seems impervious to insult.) When he is out in public in the days following the attack on Pearl Harbor, people call him names, spit on him and, in some cases, threaten him. The police department assigns bodyguards to keep him safe.

Dr. Ashida has what he believes is a “shameful” secret. In the world that he inhabits of hyper-masculine, crime-fighting alpha-males, he is secretly gay. The lone object of his desire is one Bucky Bleichert, a boxer with whom he has been friends since high school. He sets up a hidden movie camera in the shower room to capture footage of Bucky naked. The one femme fatale in Perfidia, one Katherine “Kay” Lake, offers Dr. Ashida a roll in the hay but he, of course, isn’t interested.

On the day before the Pearl Harbor attack, a Japanese family of four, the Watanabes, are brutally murdered in their home. It appears to be a sort of ritualized killing, maybe a suicide, but the police just can’t figure it out. There’s an apparent suicide note written in Japanese that speaks of the “coming apocalypse,” but it’s too ambiguous. On examining the background of the Watanabes, the police discover they are “Fifth Column,” meaning they are part of the non-fighting branch of the Japanese military whose job it is to create disorder on the civilian front. The Los Angeles police are hoping to find a Japanese suspect to pin the Watanabe murders on, to somehow mitigate the internment of the Japanese people. If it turns out that a white person committed the murders, it will be a public relations nightmare.

If you read Perfidia and some of the other novels of James Ellroy (L.A. Confidential, American Tabloid, among others) you know that the Los Angeles Police Department of the past was unspeakably corrupt, or at least it is that way in the Ellroy universe. Most of the upper tier of the police department are on the “make” in some way or other. They have no allegiance to anything other than themselves. They take drugs, cheat on their wives, kill without compunction whenever it suits them, cover up evidence, and involve themselves with gangsters and shady characters that will advance their own interests. They don’t account to anybody but themselves. These crime fighters are in some ways worse than the criminals they pursue.

Some real-life people (Bette Davis, Joan Crawford, J. Edgar Hoover) appear as minor characters in Perfidia, and James Ellroy paints a very unflattering portrait of them. It’s probably a good thing they’re all dead or they might be initiating some legal action. Bette Davis having a torrid affair with police sergeant Dudley Smith? It somehow doesn’t fit in with the idea we have of Bette Davis. (Bette’s husband, we are told, is a “chains-and-leather queen.”) Joan Crawford seducing a young police officer half her age? Maybe so, but it’s an odious thought. J. Edgar Hoover with pomaded hair and buffed fingernails developing “crushes” on handsome L.A. police officers? I somehow doubt it. It’s all part of the badly damaged world of James Ellroy.

However you look at it, Perfidia is fun to read for its portrayal of a time and place. Very few of us alive now were alive seventy-five years ago at the start of World War II; this is a vivid “re-imagining” of those days. As long as the novel is, the chapters are short, the paragraphs are short, the sentences are short and punchy, and we never get bored. Keep turning those pages and eventually you’ll come to the end and want more.