American author Herman Melville (1819-1891) wrote his last novel, Billy Budd, Sailor, toward the end of his life and it wasn’t published until more than thirty years after his death. As with his contemporary, Edgar Allan Poe (1809-1849), Melville wasn’t recognized as a literary genius until after he was in his grave.

Billy Budd, Sailor is set on board a British man-of-war (battleship) in the 1790s. It is a serious exploration of the ethics of capital punishment, the rights of the individual versus the good of the collective, and the what happens when a “decent” man is confronted with a situation where what he “feels” to be right (his conscience) is in conflict with what the law is saying must be done.

Billy Budd is twenty-one years old. He is “impressed” into naval service on a British man-of-war, the Bellipotent; this means he is forced to serve against his will as if he is a slave. (This was a common practice during these times.) Billy possesses great physical beauty, a child-like innocence, and charm; he is well-liked and even loved by most of the other sailors and also the officers on the Bellipotent. There is something about him that is almost noble. He is more than once likened to Christ. His only defect, as far as anybody can see, is a stutter that manifests itself at inopportune moments.

Naval commanders are more than usually aware of mutiny at the time of Billy Budd, Sailor, because a couple of mutinies have occurred that are still fresh in everyone’s minds. Enter John Claggart, the master-at-arms on board the Bellipotent. He is the snake in Billy Budd’s garden whose mission it is to corrupt innocence. He goes to the captain of the Bellipotent, Captain Edward Fairfax Vere, with stories that Billy Budd has been making remarks that could incite mutiny among the men. Anybody who knows Billy Budd knows this not to be true. Is it just that Claggart is envious of Billy Budd’s good looks and his popularity among the men and is out to “get” him?

When Captain Vere brings Billy Budd and John Claggart together and Billy Budd hears what Claggart is saying about him, he punches him once in the face; with just this one blow, Claggart falls to the floor dead. Now Captain Vere is faced with a dilemma. Will he follow the law, which calls for the execution of the offender, or will he allow his personal feelings for Billy Budd to stand in the way of his “duty?”

Billy Budd, Sailor is not an easy novel to read or comprehend. A great piece of writing though it may be, it’s not always “enjoyable” reading. Melville’s style of writing (the style of the time in which is was written) is wordy; he makes far too many digressions and parenthetical statements for the narrative to flow smoothly. Our interest is constantly challenged. How many readers just give up and don’t finish reading the book to the end? I doubt if Herman Melville cared or gave it much thought. 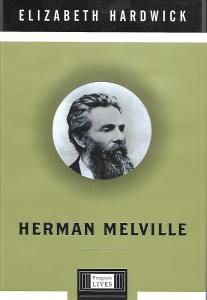 Herman Melville, by brainy Melville scholar Elizabeth Hardwick, is a short (158 pages) biography in the “Penguin Lives” series. It is an overview of Melville’s life and a dissection of each of his major works, beginning with Redburn, Omoo, Mardi, Typee, and on to Moby Dick and later works such as the short story “Bartleby the Scrivener” and the short novel Billy Budd.

In a nineteenth century American novel class in college, they had us read Herman Melville’s massive and difficult novel Moby Dick. We had a week to read it, study it, and uncover its secrets. The next week we were to move on to Henry James’ The Ambassadors, which is also a very difficult novel to read. (What is wrong with these people?)

While Moby Dick is notoriously difficult to read, most people in the know agree that it is the greatest American novel ever written. Its central character, Captain Ahab, is a driven megalomaniac. In an earlier encounter with the monster white whale, Captain Ahab lost a leg. Now, spurred onward by vengeance, he will risk his ship, The Pequod, and all the men on it for another chance to bring down the whale that has come to be known as Moby Dick. The whale is a symbol for something. Just what it is a symbol for has never quite been established. Of course, the question has sparked endless speculation.

By all accounts, Herman Melville (1819- 1891) did not have a happy life. When he was young, he worked on a whaling ship, abandoning ship once in Liverpool. This shipboard experience gave him the experience he needed for his books. He lived with his family in New York in shabby gentility. He always had money worries and was frequently on the verge of bankruptcy. He met the by-then established writer Nathaniel Hawthorne, who was fifteen years older than Melville; the two of them became acquaintances, if not the best of friends. He was unhappily married, while his sexual interests seemed to lie elsewhere. (His writing is full of “homoerotic yearnings.”) He was the prolific (and fast) writer of many books, but he was never commercially successful during his lifetime. Of his four children (two boys and two girls), one of his sons committed suicide at age eighteen and the other died in faraway California at age thirty-five. Of his two daughters, one was debilitated by rheumatoid arthritis.

When Herman Melville died at age seventy-two, he was mostly forgotten, spending the last nineteen or so years of his life working as a clerk for a meager salary. It wasn’t until the 1920s that there was a great revival of interest in him and his work, particularly the novel Moby Dick and two shorter works, “Bartleby the Scrivener” and Billy Budd.