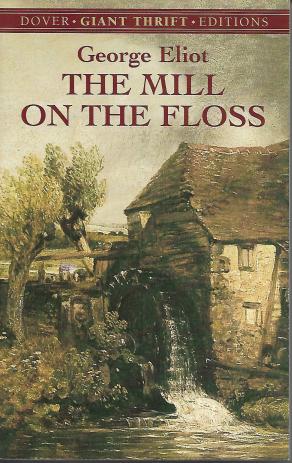 English country life in the nineteenth century: Mr. Tulliver is a miller and landowner. He owns a picturesque little mill on the River Floss. He has a not-very-bright wife named Bessie and a son, Tom, and a daughter, Maggie. The Tullivers are simple country folk who live modestly but comfortably. Tom is four years older than Maggie. They have a happy childhood until tragedy intervenes and the family is faced with financial ruin.

Mr. Tulliver is involved in a lawsuit with the wealthy Mr. Wakem involving water rights on the river where the mill is situated. Mr. Tulliver believes he will win his case, but he doesn’t and the family loses everything. Mr. Tulliver, blinded by his feelings of hatred for Mr. Waken, is unreasonable and refuses to seek a middle ground with the man he sees as the devil incarnate. We see subsequently that Mr. Wakem isn’t as bad as Mr. Tulliver makes him out to be. At the urging of Tom Tulliver, Mr. Wakem buys the mill and agrees and pay Mr. Tulliver wages to continue to run it. It galls Mr. Tulliver to have to work for Mr. Wakem, but he agrees to the arrangement for the sake of his wife and Tom and Maggie. Although the Tullivers can go on living in the same house at the mill, they have lost all their furniture and household possessions but, more importantly, they have lost their standing in the world, a thing that is very important to people of their class.

The years pass. Tom and Maggie are now young adults. Maggie devotes her life to her ill father—the loss of his lawsuit is what made him ill—and her feckless mother. She has adopted a philosopher of selflessness that she has taken from a medieval monk. Her dearest friend in the world is none other than Philip Wakem, son of the dreaded Mr. Wakem. Philip has a deformity, a hump on his back, that makes him something of an outcast in society. Maggie has to keep her friendship with Philip a secret from her father and brother. Mr. Tulliver believes that anybody by the name of Wakem is to be despised.

Tom, now grown to manhood, is ambitious. He becomes obsessed with the idea that he will work to pay back the money his father owes and restore the family to its former social standing. He begins working as a sort of apprentice for one of his uncles; he rises in the business and soon he begins to make money on his own, all of which he turns over to his father to help repay the family debt.

Taking his cue from his father, Tom believes that Mr. Wakem was the cause of the downfall of the family and that anybody by the name of Wakem is poison. He makes Maggie promise that she will have nothing to do with Philip Wakem, although Philip is innocent of any wrongdoing in the case with the Tullivers. Ever obedient to Tom and to the family honor, Maggie agrees to never see Philip again, even though Philip has told Maggie he loves her and she thinks she might love him with a love that is more than pity for his deformity.

The day that Tom, age twenty-three, finally makes enough money to restore the family to its former social standing is a happy occasion until Mr. Tulliver has a chance meeting with Mr. Wakem. They have a violent argument and Mr. Tulliver knocks Mr. Wakem off his horse and physically attacks him. Mr. Wakem is unhurt, but Mr. Tulliver, from the effects of violent feeling, experiences a kind of apoplexy and dies in a few days. With Mr. Tulliver dead, Tom carries on his hatred of the Wakem family. He makes Maggie promise that she will have nothing to do with Philip Wakem or with anybody named Wakem. Meanwhile, Maggie, now age nineteen and a stunning, raven-haired beauty, has a new gentleman admirer, one Stephen Guest, who is ostensibly the beau of her cousin Lucy. Maggie is not the usual Victorian coquette, though. She has experienced too much heartache in the world to be shallow and self-possessed.

Mary Anne Evans, who lived from 1819 to 1880, wrote under the name George Eliot because she believed that women writers were not taken seriously. She wrote seven novels, including Silas Marner, Middlemarch, Adam Bede, and Daniel Deronda. She published Mill on the Floss in 1860.

I started reading Mill on the Floss as a senior in high school and didn’t finish it at the time because I was too preoccupied with other things. I always meant to go back and read it in its entirety and now I have done that very thing. With its long wordy sentences and long paragraphs, it’s a product of its time, meaning it’s not an easy book to read. It’s of moderate length (424 pages), though, and the story of a mid-nineteenth century English family, if not gripping, is compelling and interesting enough to carry us through to the end without too much in the way of pain.