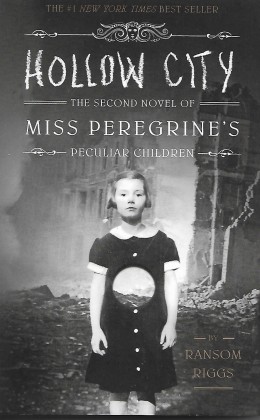 Hollow City by Ransom Riggs is the second novel in a fantasy trilogy, the first novel being Miss Peregrine’s Home for Peculiar Children and the third being Library of Souls. I’ve read the first two novels in the trilogy and will read the third one, well, someday. It is about a group of “peculiars,” children who have special talents or abilities; for instance, Millard is invisible; Bronwyn has superhuman strength; Horace is a boy-sized gentleman in monocle and top hat who has the gift of prophesy; Hugh has an army of bees at his command living inside him; Emma can produce fire at her fingertips; Olive floats because she is lighter than air; Enoch can animate the dead for brief periods of time.

Into this mix of peculiars comes Jacob Portman, an odd, sixteen-year-old American boy who ends up in Wales trying to find out what happened to his grandfather, Abraham Portman, who was peculiar in the same way that Jacob is. These peculiars live in a “loop,” meaning a time and place that are outside the real world. (Their particular loop is in 1940, during World War II.) Peculiars the world over live in loops and each loop is presided over by an “ymbryne.” Miss Peregrine is the ymbryne of the particular loop this particular set of peculiars occupy. Jacob believes there is nothing special about him, but as he becomes drawn into the group of peculiars, he discovers that he does in fact have a special talent. He can feel “wights” when they are near. Wights are the deadly enemies of the peculiars because they want to extract their souls and eat them. That’s how they become “hollowgast.”

At the end of the first novel in the trilogy, the peculiars’ home in Cairnholm, Wales, is attacked and destroyed by Wights. Their ymbryne, Miss Peregrine, has been turned into a falcon and has a good chance of not being able to switch back. The peculiars must flee their home, with Miss Peregrine (who is now a falcon), with them. They have only a short time to save Miss Peregrine or she will be a falcon forever. Hollow City is a kind of picaresque novel, as the peculiars have all kinds of quirky adventures and experience all sort sorts of dangers as they travel to London. Wait a minute! Don’t they know it’s 1940 and there’s a war on, with London under almost constant attack by German planes? It turns out that Germans are the least of their worries.

Hollow City is light, almost effortless reading. To make it even more interesting and fun to read, the text is liberally punctuated with “peculiar” vintage photographs that fit in with what’s going on in the story. In an interview at the end of the book, author Ransom Riggs says that in the first book, he wrote the story to match the pictures and in the second novel he wrote the text and then looked for pictures that were appropriate to what was going on in the story. Either way, it works, if you, the reader, are willing to suspend disbelief and be drawn into a fantasy world somewhere in the vicinity of Lewis Carroll, L. Frank Baum, or Gregory Maguire, but not quite as far as the nightmare world of H. P. Lovecraft.