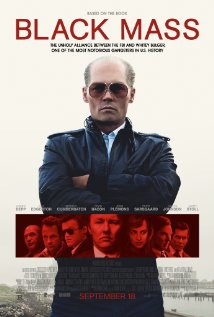 For decades James “Whitey” Bulger was an organized crime boss in Boston, head of the Boston Irish mob known as the Winter Hill Gang. He demanded absolute loyalty from his associates and, if he didn’t get it, he was prepared to kill without compunction. In the 1970s he made a deal with shady FBI agent John Connolly to become an informer with the purpose of bringing down a rival mob run by Italians. He hated informers, he said, but he became one to do to his rivals what they deserved. If you rat on somebody who deserves it (so his reasoning went), it isn’t so bad.

In Black Mass Johnny Depp plays Whitey Bulger with receding hairline and crazed, blue-eyed intensity. (How do they get his eyes to look that way? At times he looks like an evil doll.) And, as psychotic as he is, he has his sweet side. He has a young son whom he loves, he allows his elderly mother to cheat him at gin rummy and he’s kind to the old ladies in the neighborhood. For those who knew him, though (even for their whole lives), he was to be feared. You never knew what he was thinking or what he might do. He was inclined never to forget even the smallest slight or insult.

Joel Edgerton, who last year played Pharaoh Ramses II in Exodus: Gods and Kings (with plenty of eye makeup), looks bloated as FBI guy John Connolly. (At times his Boston accent seems over the top.) Of course, associating himself with Whitey Bulger isn’t a good career move for him. While he is ostensibly on the side of “good,” things don’t work out well for him.

There’s a great cast of supporting players in Black Mass, including Rory Cochrane (who conveys a lot of feeling without words) as Steve Flemmi and Jesse Plemons as dough-faced Kevin Weeks (not very bright but a game player). Benedict Cumberbatch, last seen as gay Alan Turing in The Imitation Game, plays Whitey Bulger’s straight-shooting (or is he?) politician brother, Billy Bulger. Juno Temple, always a standout, plays a hooker/drug addict who meets a not-very-pleasant end at the hands of Whitey Bulger, just when she was beginning to think he was on her side.

Adding to the irony of this story is that Whitey Bulger, regardless of the number of souls he dispatched to the next world, still lives in this one. After sixteen years as a fugitive, he was captured in California, living under an assumed name in 2011. He was put on trial and today serves as an inmate in a federal prison in Florida. He is 86 years old.

What makes Black Mass so interesting (if maybe a little reminiscent of other crime movies, including The Departed) is that it’s a true story rather than a fictional one. After a summer of youth-oriented fluff in movie theatres, isn’t it refreshing to see a movie that is actually about something?