Tag Archives: The Only Red Dog in the Neighborhood

The Only Red Dog in the Neighborhood 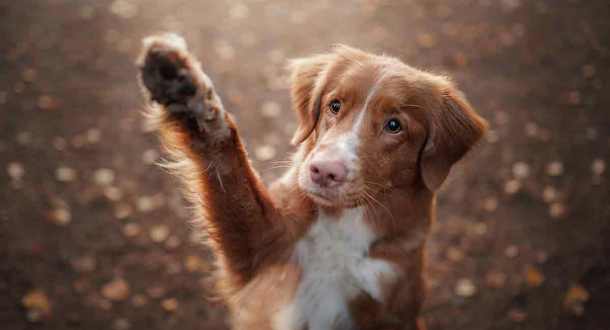 Grandma lived in the city so we only saw her every two or three years. She had an apartment high up in a city building on a busy street and she worked as a manager in retail. She went to nightclubs and the theatre and wore a fox fur with little glass eyes. She had been married six times but, to be fair, she was married to one of her husbands twice, so she only had five husbands.

She always smoked a lot of Philip Morris cigarettes, ever since she was young. When she was in her sixties, she got what they call emphysema of the lungs. Doctors didn’t know yet if it would kill he or if she’d get over it. She kept on smoking, even though she might die from it, but she began using a six-inch cigarette holder. She believed the holder would make the cigarettes less harmful to her lungs.

Since her health was in decline and she was finished, finally, with marriage (she was separated from her most recent husband and then he conveniently died), she moved to the small town of Echo Bend where we lived, to be near, she said, her only living child (my mother) and her two grandchildren (my brother and me). She bought a house near the school, within convenient walking distance of our house. She never drove a car and was not about to learn in old age, so she walked every place she went or took taxi cabs.

A lot of Echo Bend people didn’t know what to make of grandma; some of them were openly contemptuous of her, refusing to speak to when they met her on the street. They knew about her many marriages and considered her a woman of loose morals. (Some of the ladies believed that grandma would make a play for their husbands if given the chance.)

When she dressed casually, she wore men’s dungarees and loose shirts from the army surplus store and sandals with socks. (Who wears sandals with socks?) At church on Sunday she always wore bright colors—orange, red, yellow, or green—while the other ladies wore their somber Puritan hues. She also favored hats with feathers or some other kind of ornamentation such as a bird in flight or realistic-looking cherries that hung down and jiggled when she moved her head. And, of course, there was always the cigarette holder, which most thought a Hollywood-inspired affectation. (Who does she think she is anyway? Gloria Swanson?)

Grandma wasn’t used to living alone and she didn’t like to cook, so two or three nights a week she walked up to our house for dinner. After the meal was over and the dishes washed and put away, mother and grandma would sit at the kitchen table and gab and smoke cigarettes. Then when grandma was ready to go, mother would take her home in the car.

One Saturday afternoon grandma arrived at our house for dinner crying, limping and gasping for breath.

“What happened?” we asked.

“That would be Red Rover,” I said. “He belongs to the Tutwilers.”

“Bit you where?” mother asked.

Grandma pulled up the leg of her dungarees. On her calf was the perfect imprint of a dog’s mouth. It was bleeding a little bit and beginning to swell.

“We have to get you to the doctor,” mother said.

Grandma groaned. Her face was pale and she looked as if she might faint.

“Did you do anything to provoke the dog?” mother asked.

“Of course not! I was just walking past. He came from around the house and barked at me a couple of times. I thought it was because he didn’t know me. I talked to him and I thought I could get him to calm down if he saw I wasn’t going to hurt him. He wagged his tail and when I reached down and started to pat him on the head, he snapped at my hand. I turned around and tried to get away from him and that’s when he bit me on the leg.”

“Did you run from him? That’s the worst thing you can do.”

“When a dog comes at you baring his teeth, wouldn’t you run from him?” grandma asked.

Mother got a pan of hot water and a washcloth and bathed the place on grandma’s leg the best she could and then poured alcohol over it. Grandma gripped the back of the couch and gritted her teeth as if a bullet was being pulled from her flesh.

Dr. Overman wasn’t in his office because it was Saturday, but she left a message and he called back a few minutes later. I was listening in on the extension.

“Keep her calm and cleanse the wound,” Dr. Overton said.

“I already did that,” mother said.

“Bring her down to my office first thing Monday morning. I’ll take a look at the bite and give her a tetanus shot, but the most important thing right now is to observe the dog and make sure it doesn’t show any signs of sickness. Do you know who the dog belongs to?”

“His name is Red Rover. He’s a neighborhood dog.”

“Good. Go to the owner and tell him what happened and that the dog must be absolutely confined for a few days and observed for any signs of sickness. If the owner won’t cooperate, called the sheriff.”

“My dog?” Tut Tutwiler asked when mother told him. “Are you sure it was my dog?”

“It had to be Red Rover,” I said. “He’s the only red dog in the neighborhood.”

“He bit my mother,” mother said. “She’s an old lady and she just moved here from the city. She isn’t very well anyway. This could be serious.”

“He never bit anybody before. What did she do to him?”

“She didn’t do anything. She was just walking past.”

“I’m sure he didn’t mean anything by it. He’s a gentle dog.”

“Yes, he’s so gentle that he goes around biting people!”

“The doctor says to keep the dog confined for a few days and watch him to make sure he isn’t sick.”

“It’s not a request, Mr. Tutwiler. I don’t think you want a lawsuit on your hands, do you?”

“Okay, I’ll keep him in the garage for a few days, but I’m not going to let you destroy him. He’s the kids’ pet. They love him.”

“Nobody said anything about destroying him, Mr. Tutwiler. Just keep him locked up and keep an eye on him for now.”

After dinner grandma had regained her composure, but she was still spooked and didn’t want to go home by herself, so mother installed her in the back bedroom to keep an eye on her and make sure she took care of herself.

Grandma’s leg swelled up and she laid in bed and complained about how much it hurt and how worried she was that she would never walk again.

If grandma wanted a lemon, a root beer, a bowl of Rice Krispies, or some scrambled eggs, one of us had to take it to her. She enjoyed being waited on, I could tell, although she never let any of us forget how uncomfortable she was. She loved having somebody sit and listen to her talk as she recounted every dog-bite story from her long life, going all the way back to when she was three years old. (Most of the stories had a tragic ending.) When she wanted to smoke, one of us had to sit with her and breathe her smoke and make sure she snuffed the cigarette out in the ashtray and didn’t set the bed on fire.

On Monday morning mother got grandma out of bed early and took her downtown to see Dr. Overman. They were gone all morning and when they came back home, grandma wanted to go to “her” room to rest.

“What did the doctor say?” I asked.

“She has an erratic heartbeat.”

“You should have known her mother.”

“What about the dog bite?”

“It’s not going to kill her. The doctor told us to keep it clean, as if we didn’t already know that. He gave her a shot.”

Five days after the dog bite, grandma said she felt well enough to go back home the next day. She thanked us for taking care of her but said it was time to go back home and take care of herself. She didn’t like leaving her piano, antiques, books, and glass figurines unattended. House breakers were probably already having a field day with her things.

We checked with Tut Tutwiler every day to see how Red Rover was getting along. He showed no signs of sickness, other than disgust at being locked up. He would escape with his life this time, but with a warning. If he bit anybody else, intentionally or not, it was probably going to be the end of him. Mr. Tutwiler promised to keep him in the yard or chained to a post if he didn’t behave himself.

On the morning of the day that grandma said she was going back home, she didn’t get up in time for breakfast. Mother went in about nine o’clock to wake her up. Grandma was, as the saying goes, “unresponsive.” Mother called an ambulance and they came and took grandma away to the hospital.

The doctor who examined grandma said she died of a heart attack in her sleep. She didn’t know anything. She felt nothing. It was a blessing to go that way.

People in the neighborhood began saying that Red Rover killed grandma. They would drive by and see him in the yard and say, “that’s the killer dog that killed that old woman.” People can be so ignorant, as I’m sure you are well aware.

Posted in Uncategorized and tagged Allen Kopp, fiction, short story, The Only Red Dog in the Neighborhood. Bookmark the permalink.