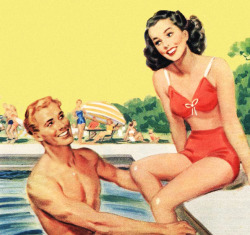 Swimsuits are Optional ~ A Short Story by Allen Kopp

August completed the tenth grade and would go on to the eleventh when school took up again. He was looking forward to a summer of doing what he wanted and not so much what he was told to do. He planned to spend the summer alone, mostly indoors, thinking and cultivating his own interests. Exactly what those interests were wasn’t clear to anybody and especially not to him. He would watch old movies on television (he liked Kay Francis and Mary Astor), read some good books, listen to music (all of Beethoven’s symphonies) and, when he felt like getting out, take a book to the park and find a shady spot under a tree and commune with nature until ants starting crawling up his pants leg. Most other people his age, he knew, would be going out on dates, going to swimming parties and getting their drivers’ licenses. He didn’t have his driver’s license; he would get it someday but not just yet. If he was able to drive on his own, his father would probably expect him to get a summer job and buy a car that he would have to pay for out of his own money. No thank you! All that could wait.

On the very first day of summer vacation a girl he hardly knew named Beulah Buffington called him on the phone.

“I’m not good with names,” he said. “Describe yourself to me.”

He did remember her but was only playing with her in a way she didn’t appreciate. If he disavowed knowledge of her, he wouldn’t need to be nice to her.

“I’m as tall as most of the boys at school. I have brown hair and a full face. I’m what people call big-boned.”

“A lot of people fit that description.”

“I failed the Constitution test two times. I passed it on the third try.”

“You had a crying fit in American history class and called the teacher a bozo.”

“That’s me,” she said. “I think if I had known I was going to have to describe myself to you, I wouldn’t have bothered calling.”

“Oh, that’s all right,” he laughed. “The thing with girls is that they all kind of blend together for me.”

“No, no, that’s all right! What was it you wanted to talk to me about?”

“Next week is Dot Gilmore’s seventeenth and we’re having a pool party at my house to surprise her.”

“There isn’t any reason why you should.”

“Who did you say the party is for?”

“August, you are impossible!”

“Can you describe her for me?”

“She’s one of the most popular girls in school. She was yearbook queen. Her picture is everywhere.”

“We’re having a pool party for her at my house.”

“When we were discussing who to invite, it seems your name came up. I don’t know why.”

“Would you like to come? It’ll be from three o’clock in the afternoon on Thursday until about dark.”

“I don’t really know how to swim, Betty,” he said.

“I don’t think any of us knows how to swim. We just splash around in the water. The boys try to drown each other. There’s a diving board but people don’t dive; they just jump off. There’ll be water volleyball, music and lots of food.”

“I don’t know how to play water volleyball.”

“It doesn’t matter. Anybody can play.”

“Would I need to wear a swimsuit?”

“You can swim naked if you want to, as long there are no grownups present.”

“Um, hold on a minute. I need to check my calendar.” He kept her hanging on for a good two minutes and when he went back to the phone he said, “Sorry, I can’t come. I’m having abdominal surgery that day.”

As he was hanging up the phone, his father came into the room, reeking of aftershave.

“Who was that on the phone?”

“I’m going away for a few days on business. I want you to go stay with Aunt Vivian.”

“I hate staying with Aunt Vivian.”

“I could probably pull some strings and still get you into Camp Bonhomie.”

“I’m not going through that again.”

“What will you do while I’m away?”

“The same things I do when you’re here.”

“I worry about going off and leaving a tenth grader at home by himself.”

“I’m very mature for my age. I like being alone. And I’m in the eleventh grade now.”

“A young boy shouldn’t spend so much time alone.”

“What would you say if I told you I’ll probably get married again by the end of summer?”

“No, she’s completely out of the picture. I heard she was in Europe. Good riddance.”

“Where do you meet all those women?”

“They’re just…around. You’d never believe how many there are just waiting to fling themselves at a halfway decent fellow.”

“Just give them a little encouragement and they’re all over you like flies on honey.”

“I thought your interests lay elsewhere. What about Paul? What about Luke?”

“In your case, it probably isn’t a good idea.”

“Don’t you want to be a family again?”

“Your mother has been gone for eight years now.”

“I know. I was there. I found her, remember? I’ve been screwed up ever since.”

“We all have our painful childhood memories.”

“Most people don’t come home from school and find their mother swinging from a rafter, though.”

“I know it was awful for you. I’ve been trying to make it up to you all these years.”

“You can make it up to me by not getting married again.”

“You wouldn’t like to have a baby brother or sister?”

“Am I not proof enough that you should never go any farther in that direction?”

“Oh, August!” his father laughed. “I don’t know where you come up with that shit! It’s grand that you read a lot of books, but sometimes you can overdo even that.”

“I want you to get out more. Cultivate some friendships. I know you’re naturally reserved, but you have to at least try. Meet people halfway.”

“Thanks for the advice, father.”

“You’re young. It’s summer. You need to be out having some fun. Don’t stay cooped up in the house all the time by yourself.”

“I was just invited to a pool party.”

“Wonderful! When is it?”

“I know you’ll have a really good time.”

“I need to buy a bathing suit and some other things.”

He took two fifty-dollar bills out of his wallet and put them on the table. “If that’s not enough,” he said, “charge the rest.”

“Get whatever food you want. Try to eat some healthy things. Fish and vegetables.”

“Aunt Vivian will drop by often to see how things are going.”

“I hope she gives me some warning.”

“If you need anything, you can call her any time of the day or night.”

“I know. She’ll be all over me like flies on honey.”

“Hah-hah! Get out and get some fresh air.”

He breathed a sigh of relief when his father finally left and then, without missing a beat, he went to the phone and called his friend Colin Mayhew. Colin was one of the few people in school with whom he had anything in common. They were both repeatedly humiliated in gym class when they were chosen last for basketball.

“How are you, old friend?” he said cheerily into the phone.

“This is your old friend August Wellington.”

“What’s new and different with you today?”

“My mother is making me move some furniture for the painters.”

“Why don’t you sneak out and come over?”

“Why would I want to do that?”

“My father is gone and I have the whole house to myself.”

“I always love it when my parents go away and leave me alone,” Colin said.

“It doesn’t happen very often, though. They still think I’m a child.”

“So, do you feel like coming over or not?”

“Some other time maybe. I’ve got a lot to do today and I’m tired.”

“You’re sixteen years old! How can you be tired?”

“It happens. My blood sugar is low.”

“Somebody called me this morning,” August said. “You’ll never guess who!”

“She called me, too. She’s calling everybody. She’s trying to get a big crowd at her swimming party next week.”

“Yeah,” Colin said. “I think I’ll go. It might be fun. If I feel uncomfortable, I can always say I have a funeral to go to and leave. How about you? Are you going?”

“I told her I’m having surgery that day.”

“Get with it, Colin! You know me better than that.”

“Well, do you want to come over and read some cues?”

“Not today, August. My head hurts and I’ve got eczema on my feet.”

“I get the idea. Well, maybe we’ll bump into each other some time this summer.”

“Sure, August. See you around.”

After he hung up the phone, he tried to call Aunt Vivian but her line was busy. It was probably better not to get her started, anyway.

He went into the kitchen and opened the refrigerator door to see what was there and then closed it again. Then into the dining room, where he pulled back the curtain and lifted the blind and looked out at the house next door. The people were away and the curtains drawn. Everybody has flown the coop. Nobody here but us chickens.