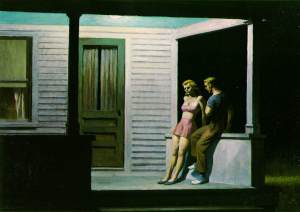 Nola was reading a book sitting beside an open window in the quiet house when she heard a soft knock on the door. It was eleven o’clock at night and she wasn’t wearing very much, but she went to the door and opened it anyway. She was feeling lonely, and a little blue, and was glad for the chance to talk to someone.

“Oh, hello,” she said, when she saw Roy standing there. She was neither happy nor unhappy to see him.

“Why don’t you come out and talk to me. I’m not in any hurry to get home just yet.”

“Oh, all right. I suppose I could for a little while.”

She turned on the porch light and stepped out the door.

“What is that you’re wearing?” he asked. “Is that what you sleep in?”

“Of course not! After I took off my uniform, I put this on to try to keep cool. I wasn’t expecting any callers.”

“It looks like your brassiere and your step-ins. And pink, at that!”

“Well, you shouldn’t be looking. If your delicate sensibilities are offended, I’ll go put on a robe.”

“It was over a hundred degrees today and will be again tomorrow.”

“It’s hotter here than the Sahara Desert in Africa. Did you know?”

“We’ve still got two more months of summer,” she said. “I don’t know if I’m going to last. I just wish it would rain.”

He looked up at the clear, star-laden sky and held out his hand. “Not a chance,” he said.  He sat on the porch railing and she leaned her backside against it beside him. A moth fluttered crazily around the light.

“Do you want a cigarette?” he asked.

“I’ll just take a puff or two off yours.”

He lit up and handed the burning cigarette to her.

“I might call Nellie in the morning,” she said, “and tell her I’m sick and can’t make it in. It won’t be too much of a lie.”

“I thought you were going to quit that job.”

“I can’t quit until I have another job lined up.”

“I thought you were going to call in sick.”

“Well, I haven’t definitely made up my mind about that yet.”

“I can’t stay awake all night and work all day.”

“You won’t sleep anyway in this heat.”

“I’m usually able to forget how hot it is and go to sleep about two o’clock.”

“And then you have to get up at five.”

“And the whole rotten routine starts over again. What a life.”

“Let’s run away together.”

She laughed and blew out a spluttering stream of smoke. “Where to?” she asked.

“I don’t know,” he said. “We could hop a freight train somewhere.”

“Oh, sure! That sounds worse than what I have now. As lousy as my life is, I at least have a bed to sleep in and food to eat.”

“If you ran away, you’d be free of everything here. You could start over somewhere else.”

“What would I do about my mother?”

“Send her a postcard.”

“You’re not being very practical.”

“That doesn’t get you anywhere.”

A police car drove past, slowed almost to a stop, sped away again.

“Must be looking for somebody,” she said.

“Are you still looking for a job?”

“Off and on. I could maybe go to work for my uncle if I wanted to, but I don’t want to.”

“I applied for a job as an usher at a movie theatre downtown, but I probably won’t get it.”

She watched the fireflies in the yard and didn’t say anything for a while. “Can you see us going on this way for the next forty or fifty years?” she asked. “Until we die?”

“I think there has to be more to life.”

“Maybe tomorrow will be better. That’s what you have to hope for.”

“I might get married to somebody someday,” she said, “but it’s going to have to be to somebody who can take me away from all this.”

“You wouldn’t marry me?” he asked. She knew he was joking.

“Well, that can always change. I haven’t completely given up on life.”

“Go to school and become a doctor or a lawyer,” she said. “Then I’ll consider marrying you.”

“I’m lacking some necessary ingredients for that,” he said. “Namely, money and ambition.”

“Who says? My father has been a bum all his life and his father before him.”

“Maybe you’re better than that.”

“My mother wants me to join the army. She’s threatened to throw me out of the house if I don’t do something.”

“Maybe that’s what you need.”

“If she tosses me out, can I come and live with you?”

“No. You and my mother wouldn’t get along.”

“You see how it is? If it’s not my mother giving me grief, it’s somebody else’s.”

“Are you sure you won’t go to the park with me?”

“It’s late. I need to try to go to sleep so I can get up and go to work in the morning.”

“What a life,” he said. “My room is so hot I can’t stand to lie on the bed. I put a quilt on the floor underneath the window and sleep on it naked until the sun comes up.”

“I really should be going in now.”

“Will you go to the park with me tomorrow night?”

“Something good is going to happen tomorrow,” he said. “I just know it. Maybe a thunderstorm.”

She knew he would leave whenever she told him to. He wouldn’t try to kiss her or touch her, the way some would. He never did that; he wasn’t that kind of a boy. She had known him so long. He was more like the brother she never had.

She went back inside and turned off the porch light, locked the door. She went to the door of her mother’s room to make sure she was still sleeping and then she walked through the dark house she knew so well and got into her bed. Far off in the distance she heard the low rumble of thunder that could only mean one thing. If she stayed awake long enough, she might see lightning and hear some rain on the roof.