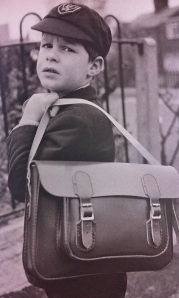 I was walking home from school with my friend Buster Dahl. We went slow because Buster wore a brace on his leg. I wasn’t sure what was wrong with him but I had heard my mother tell somebody on the phone that he had tuberculosis of the bones. I didn’t know what that meant but I knew it sounded bad.

“Walking home is the best part of the day,” Buster said.

“Better than lunch and recess?”

I was going to ask him what was wrong but just then I saw what he saw: Herman Dexter headed toward us.

“Just act natural,” I said, but what I meant by that I didn’t know.

We were all afraid of Herman. He was three years older than we were and an acknowledged psycho.

“So, they’re allowing vermin on the street these days?” Herman said with his cruel smile when he saw us.

“We just saw a gorilla,” Buster said. “It was your mother. She was looking for you.”

Herman kept us from moving past with his blockish body. My skin crawled with revulsion at being that close to him. He had yellow, spaced-apart teeth and black splotches on his fat cheeks and forehead. I didn’t know if it was dirt or something more sinister.

“We’re not going to bother you,” Buster said, “so how about if you just let us pass and not bother us?”

“No?” Herman asked. “I always think it’s fun beating the shit out of little kids.”

“I’ve been meaning to ask you, Herman,” Buster said. “How many years was it you spent in third grade?”

I thought he was laying it on a little thick—the last thing we wanted was to make Herman mad—but I didn’t say anything. If we just waited it out, he would let us pass without too much damage.

“I’ve been meaning to ask you,” Herman said. “What’s it like to be a cripple?”

“Then take that thing off your leg and let me see you run around the block.”

“Because I just told you to, you little creep!”

“I may be a creep,” Buster said, “but at least I’m not a retarded creep. I only spent one year in third grade.”

“Take that thing off your leg and let me see it,” Herman said. “I want to beat you over the head with it.”

“Leave him alone, Herman!” I said.

“Oh, do you want some too, you little mama’s boy?”

He came toward me and insinuated his dirt-caked knuckles under my nose.

“You’re a menace to society, you know that?” Buster said. “They ought to lock you up in the insane asylum and throw away the key.”

I took Buster by the arm and tried to steer him around Herman but Herman was too quick for us. He held out his arms as though trying to enfold us in a big hug.

We all knew the story of Herman’s family. Father in prison, mother a snaggle-toothed drunk, two crazy sisters, one a prostitute and the other one a man living in a woman’s body. (It would be a few years before we could figure that one out.)

I could see that impugning Herman’s family had made him madder than any of the other insults that Buster had hurled at him. He charged at Buster and viciously pushed him backwards. With Buster lying on the ground, struggling to get up, Herman straddled him like a wrestler and held his arms above his head. Buster struggled to get free but was no match for Herman.

“Let him up,” I said, pushing Herman by the shoulder with my knee to let him know I meant business.

“He’s not as strong as you. You’re going to hurt him.”

“If you hurt him, you’re going to be in really bad trouble!”

I could see that my words had some effect on Herman because he let go of Buster’s arms but stayed on top of him. With his arms free, Buster grabbed for the vintage book satchel he always carried, undid the strap, and pulled something out that to me looked like a yoyo. He held the yoyo-like object up and squirted it in Herman’s face. Herman flopped over on his back and began screaming.

“Oh! Oh! Owwwww! It hurts! Oh, my god! What did you do to me? You blinded me!” He rubbed furiously at his eyes and I could see the tears streaming down his face.

With Herman writhing on his back on the ground and unable to see us, Buster and I got away as fast as we could.

“Pepper spray. Police strength. My sister gave it to me.”

“Will he be able to see again?”

“Sure, it wears off after a while.”

“I understand there was a fight yesterday between two boys, Herman Dexter and Buster Dahl.”

“Not exactly a fight,” I said, looking at the cigarette burns on his desk.

I told him everything that happened without adding anything. It took about five minutes. When I was finished, he told me to go back to my classroom and not talk to anybody about the incident because Herman’s mother was threatening legal action against the school.

When I was walking home that day, Buster Dahl caught up with me. “Thanks,” he said.

“You told the principal the same story I did. I’m cleared now. It was a clear case of self-defense.”

“Who cares as long as he leaves us alone?”

Not long after the incident with the pepper spray, Herman Dexter was involved in an accident. He fell off the back of a moving truck and broke both his legs. He would be out of commission for a long time. There was even a rumor going around that he wouldn’t be returning to school at all. We knew there was a God.