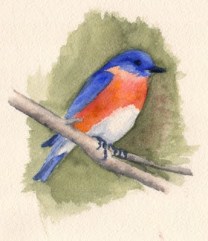 Bluebird of Happiness ~ A Short Story by Allen Kopp

If Johnny Alstead had been a color, he would have been gray. He was steady and unassuming, modest and without ambition. During his growing-up years he was obedient and abiding, always doing what he believed was expected of him and never causing any trouble. He never broke any rules or wanted anything he couldn’t have, never made any waves or rebelled against authority. He was a neuter in the sense that he was neither hot or cold, long or short, good or bad, fat or thin, handsome or ugly, sweet or sour, smart or dumb, virtuous or sinful, hard or soft, loud or quiet. He was so unremarkable that he seemed, in the minds of others, to hardly exist at all.

After graduating from high school, he didn’t have the money or the ambition to go to college, so he went to business school and learned how to become an accounting clerk. At the age of twenty, he landed a job in the office of a manufacturing plant, where he expected to stay his entire life.

At work he flummoxed his co-workers by always dressing in a white shirt, gray tie, and black trousers. He was always on time, never missed work for colds or family funerals, never expressed an opinion or talked about himself, and always did exactly what was asked of him without complaint or argument. On a personal level he was a nullity but management might have wished for a thousand others just like him.

Through his modesty and frugality, he was soon able to save the money for a down payment on a modest house in a modest neighborhood. He furnished the house with the furnishings that had belonged to his late mother and bought a used car. He drove himself to work everyday and back home again at the end of the day. He went to the grocery store and bought whatever items he needed for the week on Saturday and did all his own cooking. His one luxury was having his clothes washed at a laundry.

He had known a girl named Ruth Sitorski since his high school days. She called him up and asked him to go out on a date with her because she knew he would never call her. After they had gone out together three or four times, he knew unquestionably that the feelings he and Ruth had for each other were of a serious nature.

Ruth had not had a happy life. Her parents were in their forties when she was born. Her father was stern and old-fashioned, her mother a spiteful harpy. Her father hit her in the face and knocked her out when he discovered she wore lipstick. Her mother suffered from a mental disorder that caused her to experience delusions. She beat Ruth with a cane one time when she thought she had turned into a rattlesnake.

Ruth was looking for a way out. She didn’t love Johnny but was fond of him and saw in him the good qualities that other people missed. He was dependable and a good worker. He owned his own house and his own car; he had a steady job; he didn’t drink or raise hell. She could do a lot worse. While he might not have been the bluebird of happiness she wished for, he was an acceptable substitute.

They were married in the church on a stormy Saturday evening in May with a small gathering of family and friends (mostly hers) in attendance. After a three-day honeymoon trip to a quiet tourist resort in the mountains, they returned to the little house where Johnny had lived as a bachelor.

After a few years, Ruth began to regret her uneventful married life. Johnny never mistreated her and gave her everything she wanted, but she couldn’t get over the feeling that life was passing her by, that she was missing something essential.

She began going out at night with “friends,” sometimes staying gone until well after dawn. When Johnny asked her where she had been, she told him to mind his own business. She began sleeping during the daylight hours, getting up about dark and readying herself to go out again. She stopped cooking meals, stopped taking care of the house, stopped caring about anything.

One day when Johnny came home from work, he found a letter from Ruth on the kitchen table. She had fallen in love with a married man, she said, and they were going away together. Johnny would never see her again. She wouldn’t bother him ever again or expect anything from him. She wouldn’t even put him through the humiliation of a divorce. All she asked was that he didn’t try to see her or speak to her. She wanted him out of her life forever.

When he looked deep down into his own heart, Johnny wasn’t surprised by the letter. He knew Ruth wasn’t happy and that nothing he could do would ever change that. He regretted that the marriage hadn’t worked out, but he was certain her leaving him was for the best. A part of him was relieved she was gone. He had never really understood her, or she him. He put the letter in the same safe place where he kept his birth certificate and insurance policies. If anybody ever asked him what had happened to her, the letter in her own handwriting explained it better than his own words could have done. He put her clothes, dresses, hats, shoes—and anything else belonging to her—into cardboard boxes and set them out on the front porch for charity to come and take away.

He continued to live his pleasantly uneventful life. He went to work every day, did his work to the best of his ability, and went home again. He began attending church services regularly, took care of his house and car and went on occasional camping trips with his brother and his cousin. He built, entirely on his own, a new garage with a concrete floor with plenty of room for his car, lawnmower and tools. The garage was so tidily built and so professional looking that the local newspaper sent a reporter around to take his picture and interview him about his carpentry skills. The article that appeared resulted in his being given a civic betterment league citation that he kept on his wall throughout his long life.

When he reached retirement age, he reluctantly gave up working. He had accumulated a sizeable amount of money that, along with his pension, would allow him to live comfortably for the rest of his days. He began to acquire books for the first time in his life and to read extensively on ornithology and the Civil War. He taught himself how to build birdhouses and began giving them away to interested parties. Never having seen the ocean, he flew to the west coast (first time in an airplane) to see the Pacific and to the east coast to see the Atlantic. He spent a few days in New York City seeing the sights and was happy to go back home.

Through the long years, he thought little about Ruth but still considered himself married to her. He still wore the ring on the third finger of his left hand that signified to the world his union with her. A widow with two children from his church congregation became interested in him and called him a few times and asked him to dinner, but he always declined these invitations. He wanted no part of any other woman. One wife had been enough for him.

When he reached the ninth decade of his life, he began to grow feeble and his eyesight became dim. He was no longer able to take care of himself and do simple household chores. He sold the little house that he had lived in for more than sixty-five years and moved into a retirement home, where he had a pleasant end room to himself with lots of windows and much time to reflect on his life.

After he had lived in the retirement home for a couple of years but to him seemed like forever, his little house was torn down to make way for a new shopping center. When workmen jack-hammered the floor of the garage he had built into chunks to take it away, they came across a discovery that made them stop working and call the police. Two badly decomposed bodies, apparently a man and a woman, were interred under the concrete. There were no clues as to who they were or how they came to be where they were. Police began going through old missing persons reports but were unable to find anything that shed any light on the case.

In the course of the investigation, two police detectives visited Johnny at the retirement home. He smiled pleasantly and asked them to sit down.

“Do you remember back to when you built this garage?” one of the detectives asked him, showing him the yellowed newspaper article with his picture.

Johnny smiled, nodded and pointed over his shoulder at his civic betterment league citation on the wall.

The other detective pulled another picture out of his pocket, a picture of Ruth Sitorski that was taken when she graduated from high school all those many years ago, and handed it to Johnny.

“Haven’t seen her,” Johnny said, handing the picture back.

“When was the last time you heard from her?”

In response to this question, Johnny opened a drawer of a small dresser beside the bed and took out the letter that Ruth had written to him in her own handwriting saying she was in love with someone else and was leaving him. He had kept the letter on hand all those years because he knew as well as he knew his own name that one day the question would be asked.

The detective read the letter and gave it back to Johnny. “I want you to think back to when you built the garage,” he said. “Was anybody else present? Did you pour the concrete floor on your own, or did somebody help you?”

A bluebird landed on the sill of the open window just then and took a few hops into the room, unafraid. Johnny gestured toward the bird and nodded his head vigorously as if to indicate that in the actions of the bird lay the answers to all questions. The detectives looked at each other and shook their heads. They knew they were not going to find out what they needed to know.