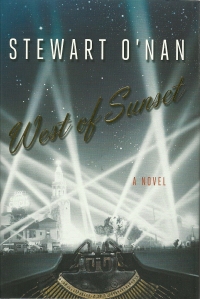 West of Sunset ~ A Capsule Book Review by Allen Kopp

More than any other writer of his generation, F. Scott Fitzgerald (born 1896) chronicled the Roaring Twenties, the Jazz Age. He wrote four solid novels (one of which, The Great Gatsby, is an acknowledged masterpiece) and dozens of short stories that appeared in publications such as The Saturday Evening Post and Esquire magazine. In the 1930s, motivated by the need for money (his daughter at Vassar College and his wife in a mental hospital), he went to Hollywood to lend his talents to writing screenplays for the movies.

West of Sunset by Steward O’Nan is a fictionalized (a novel based on real events and real people) account of Scott Fitzgerald’s time in Hollywood. Once in Hollywood, Scott installs himself at the Garden of Allah, an aggregation of villas built around a Moroccan oasis presided over by the mysterious star of the silent screen, Alla Nazimova (whom he never sees). He immediately begins hobnobbing with the famous: Humphrey Bogart and his booze-addled girlfriend (soon to be wife) Mayo Methot, Robert Benchley, Joan Crawford, Ernest Hemingway, Marlene Dietrich, Dorothy Parker and her husband and writing partner Alan Campbell, and on and on. Will his reputation as a successful novelist get him special treatment in the movie industry? Not on your life—his role as writer at Metro-Goldwyn-Mayer is largely that of studio hack. He’s given assignments that other writers have had before him or that are taken away from him and given to somebody else before he has a chance to make a difference. In a year or so, he garners only one screen credit (Three Comrades), but works (uncredited) on scripts for other movies, including, The Women (which he despises), Marie Antoinette, A Yank at Oxford, Rebecca and Gone With the Wind (which he fully expects to be a piece of crap and a huge flop).

In Hollywood Scott enters into an adulterous love affair with Sheilah Graham (real name Lily Shiel), a transplanted British girl from humble beginnings who learns all the refinements she needs to become a successful Hollywood journalist/gossip columnist. Sheilah knows about Zelda, Scott’s wife, the fragile Southern belle who has suffered from mental illness of one kind or another for her entire adult life, and knows not to expect anything from Scott. (If nothing else, she’s a realist.) Scott and Zelda also have a college-age daughter, Scottie, who doesn’t get along very well with her volatile mother. Scott and Zelda have “grown apart” during her years of hospitalization, but he tries to remain true to her in his own way and spends his vacations with her in her uncomfortable presence. Of course, Zelda and Scottie know nothing of Scott’s love affair with Sheilah. Where is all this going to end? Is he going to ask Zelda for a divorce so he can marry Sheilah? Don’t count on it.

Like many writers and creative people, Scott has a “drinking problem” that at times he doesn’t seem to be able to control. He drinks when he knows he shouldn’t, which is the hallmark of the alcoholic. He just can’t seem to function without the booze but, paradoxically, he can’t function very well with it. His drinking causes him to get fired from at least one movie writing assignment, after which he is forced to look for any work he can find to meet his debts. He ends up taking a hack job for a “B” picture for Paramount. Not an enviable position for a man of his talent or stature. As he enters his forties, the prime of life for most men, his health suffers from his excesses and we know, if it’s not readily apparent to him, that he doesn’t have long to go.

Scott’s conventional love affair with Sheilah Graham is the least satisfying aspect of West of Sunset. I found crazy Zelda much more interesting than prissy Sheilah. The scenes where Scott spends his uncomfortable “vacations” with Zelda and his daughter Scottie are some of the most compelling in the novel. The Hollywood movie lore of the thirties is fun (the one scene early in the book with Ernest Hemingway seems pointless), and dialogue with Bogie and Mayo around the pool at the Garden seems authentic. (As well as we know Bogart from the screen, we can easily imagine him saying lines such as, “Here’s to our future ex-wives.”) Any die-hard movie fan will know Mayo Methot from the movies she made for Warner Brothers in the 1930s. The way she appears in her movies is exactly the way she comes off in the book. (How many wives did Bogart have after Mayo?) If you are a fan of Fitzgerald and have a particular interest in his private life and in 1930s Hollywood in general, you will find West of Sunset a satisfying reading experience, well worth the time.