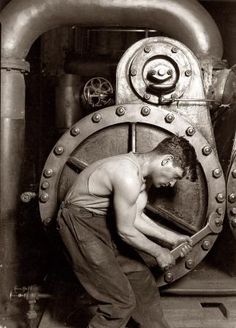 The mother looked at the clock on the wall above the stove. Sloan was late. She worried about him driving home in rush-hour traffic. He was a safe driver, but other people weren’t so safe and something could always happen.

Finally she heard his car in the driveway and let her breath out that she had been holding in. She put the spaghetti in the boiling water and was facing the door when he came in from outside.

Her smiled faded when she saw that somebody had come in behind him.

“Mother,” Sloan said, taking off his hat and gloves. “This is my friend Gaston.”

Gaston stepped around Sloan to shake her hand.

“Gaston is going to be staying with us for a while.”

She was confused and shy. She hadn’t been expecting company.

“Why didn’t you call me and tell me you were bringing somebody?” she said to Sloan. “I would have at least dusted the furniture in the living room.”

“It’s all right!” Sloan said. “You can treat Gaston just like family.”

“Supper will be ready in a few minutes,” she called after them as they took their coats and hats into the other room.

During supper, Sloan and Gaston talked easily about the things they knew, but she couldn’t think of anything to say. When she looked at Sloan, the dearest and most familiar person in the world to her, she thought he looked different somehow, animated in a strange way with a spark in his brown eyes that she had never seen before.

“Did you have an interesting day today, son?” she asked.

“More interesting than most,” Sloan said, and then he and Gaston looked at each other and laughed.

“Why is that funny?” she asked.

“The spaghetti and meatballs are delicious!” Gaston said.

“I said I quit my job today at the factory.”

“What are you saying?”

“I’m saying I quit my job today. What’s so hard to understand about that?”

“Why on earth would you quit the factory? It’s your future and your security.”

“I thought you liked your job.”

“I always hated it!”

“You never told me that!”

“Well, I suppose it was all right in the beginning, but I came to hate it after a while. I want to do something else with the rest of my life.”

She looked at Gaston, believing he had to have something to do with it. “Did you quit the factory today, too?” she asked.

“Nope,” Gaston said. “I never worked in the factory.”

“No, mother. Not that kind of a painter. He paints pictures.”

“What kind of a job is that?” she asked.

“It’s a job that most people would do if they could.”

“No, ma’am. I’ve never been married. My parents are still alive. They’re all the family I have.”

She wiped her mouth and pushed her plate aside. There would be no more dinner for her.

“Did the two of you just meet?” she asked.

“We’ve known each other for a while now,” Sloan said.

“Where did you meet?”

“Now, mother! Why are you asking so many questions?”

“There’s nothing to understand.”

“Why would you quit your job after all these years? I’m afraid you haven’t put enough thought into it. You always were impulsive.”

“I’ve been thinking for years about quitting the factory,” Sloan said. “There’s nothing impulsive about it.”

“You might have at least told me you were thinking about quitting.”

“So you could tell me I shouldn’t do it?”

“How will you live? What will you do about money?”

“I have my savings. That will keep us happy for a while.”

“But now, though, I’m going to take a vacation.”

“Don’t worry about it, mother. It’ll all be sorted out in the end.”

“When we’re finished eating, Gaston,” Sloan said, “I’ll take you up and show you my room.”

Sloan stacked the dishes beside the sink and he and Gaston went upstairs, closing themselves up in Sloan’s room for the rest of the evening.

The next morning she was in the kitchen when Sloan came down alone.

“Where’s your friend?” she asked.

“He was a little late waking up. He’ll be down in a few minutes.”

“Good. I was hoping to have a chance to talk to you alone this morning.”

“You know what about. Who is that man and why did you quit your job?”

“His name is Gaston Pierce. He is my friend. I’ve known him for about five years. That’s all there is to say.”

“Did he have anything to do with your quitting your job?”

“You never had a guest before.”

“Does that mean I can’t have one now?”

“Well, then. What more is there to say? Maybe I’m tired of always being alone.”

She was prevented from asking further questions by the arrival of Gaston from upstairs.

“I’ve starving!” he said, sitting down at the table.

She cooked the breakfast and set it on the table and busied herself while they ate. Sloan and Gaston sat at the table and spoke together quietly. She didn’t know what they were saying. Did they have secrets from her that she wasn’t supposed to know about? Her own son and his friend, about whom she knew nothing. In her own home. Things had certainly taken a disconcerting turn.

“It’s almost eight-thirty,” she said in a loud voice. “You’re going to be late for the factory, Sloan!”

“Did you forget, mother? No more factory for me.”

“Oh, yes. How could I forget? It must have slipped my mind for the moment.”

When they were finished with breakfast, Sloan and Gaston put on their coats and hats and left. “We won’t be here for lunch,” Sloan called to her. “Expect us for dinner, though.”

She went upstairs to Sloan’s room with the intention of tidying up, but everything was perfect. The bed was neatly made, the clothes all hanging in the closet, the shoes aligned side by side. The dresser and chest of drawers were straight and neat, not a sign of dust or clutter anywhere.

With no work to do, she sat down on the bed and ran her hands over the expensive light-green chenille bedspread that Sloan had picked out on his own.

Since there was only one bed in the room, it had to mean that Sloan and Gaston were sleeping together. What does it mean when two unrelated men sleep in the same bed together? She had heard of such things, of course, but had never been confronted with it in her own house.

Should she ask him if he and Gaston were sleeping in the same bed? Of course not! He was thirty-five years old. She was sixty. Nothing was the same as it was when she was young. Younger people no longer cared what older people thought. They wanted to live their own lives.

She fixed fried chicken and mashed potatoes for dinner, things Sloan had always liked. She still had hope and her hope of the moment was that when Sloan came home he’d be alone. At a few minutes before six, the time Sloan would have arrived home from work if he had gone to work, the two of them came into the house, talking and laughing.

“Did you go to the factory after all, Sloan?” she asked.

He gave her a sad look and shook his head. “You still don’t believe I quit, do you?”

“Where did you go all day if you didn’t go to the factory?”

“I’m exhausted,” Gaston said, collapsing onto the chair. “This son of yours has a lot more energy than I do!”

“Is that what you plan on doing every day for the rest of your life?” she asked.

That evening after dinner they left again without telling her where they were going or when they’d be back. This was the prerogative of the grown child, she told herself. She busied herself with paying bills and little jobs in the kitchen and went to bed early, having tired herself out.

She slept until nine o’clock the next morning and when she awoke and went downstairs, Sloan and Gaston were in the kitchen, putting away the groceries they had just bought.

“What’s all this?” she asked, pointing to the bags on the table.

“It was Gaston’s idea,” Sloan said. “He has some notion that he needs to contribute.”

She wanted to object but could find nothing to object to. Without speaking, she set the water on the stove for tea and set about cooking breakfast.

After two weeks of Gaston in the house, she decided it was time to confront Sloan. Gaston was taking a bath and would be out of earshot at least for a few minutes.

“How much longer is he going to be here?” she asked.

“Who, mother? Who are you talking about?”

“How much longer is Gaston going to be here?”

“I don’t know. We haven’t discussed it.”

“You want what to end, mother?”

“I want us back the way we were before he came here.”

“I don’t want to have to force him to leave. There must be a tactful way to handle it.”

“You can’t stand to see me happy, can you?” Sloan asked.

“He makes you happy? How does he make you happy in a way you weren’t happy before?”

“Taking control of my own life is what has made me happy.”

“I thought we were happy before,” she said.

“If something was bothering you, you could have talked to me about it. I’m your mother. What exactly is he to you?”

“I know I would never be able to make you understand, mother. People grow up and change. It wasn’t possible for me to always remain an adolescent.”

“I always gave you the space I thought you needed. I kept house for you and cooked your food and kept your clothes clean. I thought you had all you needed and wanted in life. I hoped, of course, you’d find a nice young woman one day and get married and have children, but I accepted a long time ago that you weren’t inclined in that direction.”

The next morning Sloan and Gaston loaded suitcases into the car. Gaston shook Mrs. Millett’s hand, thanked her for her hospitality and went out the door, leaving a hundred-dollar bill on the kitchen counter under the sugar canister.

“Where will you go?” she asked.

She watched the car until it was out of sight and then she sat down at the table and had breakfast. He’ll be back, she thought, and when he comes back he will be alone. It’s not that easy to leave your life behind and the only home you’ve ever known. He will choose his mother over his friend every time. I’m certain of it. And when he comes back, we’ll make some plans. We’ll fix up his room, buy some new furniture and get a new rug for the floor. And there’ll be some good times. Just you wait and see. I know of at least two lovely young women who would love to meet him.  And when it comes to his job at the factory, he can get it back simply by asking for it. As he himself said, it would all be sorted out in the end.