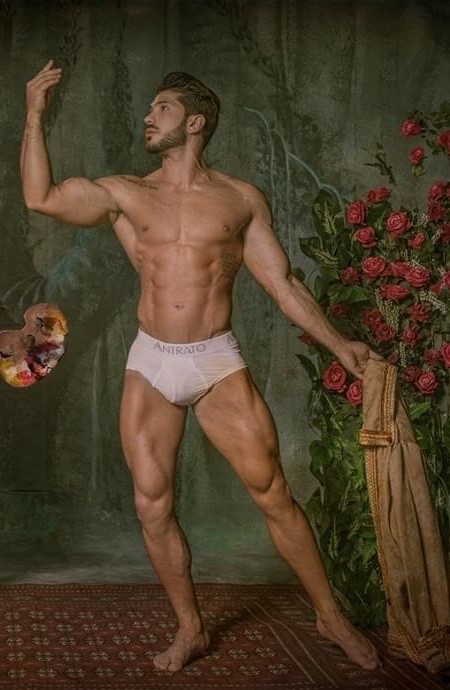 Son of Stella ~ A Short Story by Allen Kopp

From where I sit at my desk I see Logan out the window cutting the grass. Looking like nobody else, he wears loose-fitting khaki shorts with a belt and a white shirt. With his old-fashioned haircut—sheered close on the sides but longer on the top and combed straight back—he might have stepped out of Gunga Din or The Lives of the Bengal Lancers. I wonder, as I have many times during the summer, if he knows how beautiful he is.

The mower cuts off and he comes into the house through the kitchen. I hear him go upstairs and then I hear the shower running in the bathroom. I image the warm water pouring over his arms and chest and down his muscular legs. When he’s finished, he’ll straighten up in the bathroom and hang his towel neatly over the towel rack and take his clothes down to the basement and put them in the washer and pour in the soap and turn it on.

I finish a letter I’m writing and when I go into the living room he’s lying on the couch in his bathrobe. The robe is open and I can see he has nothing on underneath except white briefs. When he hears me coming, he closes the robe partway.

He looks up at me and smiles. “I’m hungry,” he says. “I haven’t eaten since breakfast.”

“Do you want to go out and get something?” I ask.

“That’s fine with me. Anything. I’m not very hungry.”

“I should probably get dressed before we eat,” he says.

“You don’t have to get dressed on my account,” I say. “You’re fine the way you are.”

He gets up and goes into the kitchen and in a little while I smell the meat cooking for the chili. I lay down on the couch and drift off to sleep for a few minutes.

We don’t have a dinner bell, so when the chili is ready he comes and stands over me and clears his throat. I open my eyes and look up at him.

“Dinner is served,” he says.

I stand up and go into the kitchen and take my place at the kitchen table underneath the cock-a-doodle-doo clock on the wall.

“Where did you learn to cook?” I ask as I taste the chili.

“This is better chili than my mother ever made.”

“Anybody can make chili. The hard part is making it taste good.”

We eat in silence for a few minutes and then he says, “I have some good news.”

“I was going to wait until mother was here, but I’ll go ahead and tell you.”

“You know I told you I applied for a teaching job at the University of Louisiana?”

“I was hired. They want me to start right away. The fall semester starts in two weeks.”

“Louisiana. It’s hot there. They have hurricanes.”

“Sure, you will. You and mother can come and visit.”

I don’t know what else to say, so I shake his hand, congratulate him and we go on eating.

Since he cooked the chili, I wash the dishes and he goes up to his room. In a little while he comes back down, wearing dressy pants and a sporty plaid shirt.

I feel a little hurt that he would prefer to go out than stay at home with me on our last night alone, but I know I’m being ridiculous. He’s a grown man and my stepson, and I have nothing to say about where he goes.

I watch an old movie on television with Madge Evans and James Cagney called The Mayor of Hell and when it’s over I take a shower and get into bed and pick up where I left off reading The Confidential Agent by Graham Greene. I read about twenty pages and then I find I have a headache so I put the book down and turn off the light.

In a little while I hear his car in the driveway. I glance at the clock; it’s twenty minutes to twelve. I try to keep from wondering where he’s been for five hours. I lie on my back and take some deep breaths and try to clear my mind of all thought.

I’m barely asleep when a sound in the hallway outside my door wakes me up. I’m annoyed that I’m awake again, when the door to my room opens, light from the hallway spilling in, and I see Logan standing there in his white briefs, hand on the doorknob.

“Anything wrong?” I ask.

He doesn’t answer me, but instead comes around to the other side of the bed, pulls back the covers and gets in beside me.

“Getting into bed with you.”

“Isn’t it what you’ve wanted all summer?” he asks.

He kisses me and I tug at the white briefs.

I don’t need to go into detail about that night except to say it made me happy and I feel good about it. I have no guilt feelings and no fear of anybody finding out. Let them find out. How little do I care.

When I wake up in the morning, Logan’s asleep in the bed beside me. I get out of bed quietly and go downstairs. I feel hungry, as I usually do in the morning, so I scramble eggs and cook bacon in the cast-iron skillet for both of us. In a little while he comes downstairs in his bathrobe, his hair tousled, and sits down at the table. He smiles and we eat silently.

He seems a little distant and preoccupied.

“Of course not. You?

“It was inevitable,” he says. “It was always going to happen, at one time or another.”

“Are you going to tell mother about it?” he asks.

“How things have changed in one generation,” I say, flicking a fly away from the orange marmalade.

When Stella arrives home in the middle of the afternoon, she seems glad to see us, but she says she is sick and she wants to go straight to her room and lie down before dinner. The truth is, she has had too many cocktails on the plane.

Logan goes to the store and buys some steaks for dinner. The smell of them cooking fills the house and brings Stella back downstairs.

“Do I smell meat cooking?” she asks. “I didn’t realize I was hungry.”

While we eat, Logan tells Stella all about his new job in Louisiana that will start in less than two weeks.

“I know you’ll be happy and successful in Louisiana,” she says, a little boozily, “and you’ll meet a wonderful woman in the swamps you’ll be happy to bring home to your mother as your new bride.”

Logan and I exchange significant looks and I take a big gulp of my iced tea.

On Thursday of the next week, Logan loads all his possessions into his small car to begin his long journey. I fill my eyes with him every chance I get because I know it’ll be a long time before I see him again.

He hugs his mother and then he hugs me and gets behind the wheel of his car and, after another round of fussing from Stella, he’s ready to go. Stella and I stand on the sidewalk in front of the house and watch him until he’s almost out of sight.

“It’s bad luck to look until you no longer see the departing person,” I say.

“Who told you that?” Stella asks.

I don’t know how long it’ll be before I have him with me again, but I only know I will live for that day. I’ve got it bad and that’s not good.