It’s You I Adore 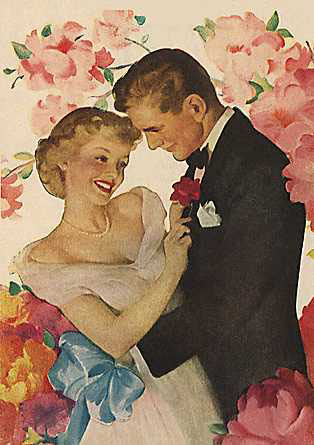 It’s You I Adore ~ A Short Story by Allen Kopp

In a row of two-story houses all very much alike, Cedric Choke lives in the house on the end with his mother. He is forty-two years old and has never bothered to get married. Every morning at seven-thirty he leaves the house to go to work and when he gets home at four in the afternoon, he doesn’t go out again. On weekends he takes his mother grocery shopping and to church service on Sunday morning. His nearest neighbors don’t know his name and have never even heard the sound of his voice.

Lynette Giles lives next door to Cedric Choke and his mother. She also lives with her mother. She is forty years old, or close to it, and has been married and divorced two times. After her second divorce, she moved “back home,” as the saying goes, “to get her life in order.” She and her mother get along fine together as long as they are careful about which topics they discuss.

Lynette  watches Cedric through binoculars out the upstairs window as he cuts the grass in his back yard. He wears a sleeveless undershirt, khaki pants and tennis shoes. She likes the play of his bicep as he pushes and then pulls the mower. On his face is a look of concentration. She likes the neat, straight rows of his cutting. A man who cuts that precisely and evenly must have a lot of good qualities. He would hang up his own clothes and rinse his own dishes and not leave it for somebody else.

He shuts off the mower and sits in a lawn chair and picks up a newspaper and opens it. He likes to read (she surmises) and is a man who wants to know what’s going on in his world. He’s not the kind who would lay on the couch in front of the TV all the time. His mother comes out of the house and brings him a bottle of beer. She is a troll-like woman, about seventy, with stooped shoulders and hair dyed an awful red that hangs down to her shoulders. He takes the beer from his mother without looking at her, takes a drink and holds the bottle between his thighs so his hands are free to turn the pages of the paper.

Cedric is so quiet Lynette hardly knows he’s there. In the year-and-a-half that she’s lived in the house next door to him, she has never heard him utter a single word. The only things she knows about him—and that isn’t much—is what she has seen with her own eyes. He cuts the grass and sweeps the glass clippings off the sidewalks. In the winter he shovels snow. As soon as he finishes these little outdoor jobs, he goes back into the house. Lynette has thought on occasion that she would go over and introduce herself, but somehow she just doesn’t have the nerve. Maybe he doesn’t speak, or maybe there’s something wrong with him, like mental retardation, and she would only embarrass him and herself, too.

When a letter is misdelivered to her mailbox, a letter that belongs to him, she sees it as her chance to engage him in conversation. She takes the letter and knocks on his door assertively, but he doesn’t answer—nobody answers, not even his troll-like mother—so she drops it through the mail slot in the door and leaves. She is certain he is at home since his car in the driveway and believes he might have come to the door if he had wanted to.

At night she lies in her upstairs bedroom and thinks about him and imagines him lying in his own bed in the room just across the yard from hers behind the heavily curtained window. When his light is off, she’s sure he must be asleep. He’s the type who would wear pajamas. His mother would take them out of the clothes dryer and fold them neatly and put them in his dresser drawer for him. He’d wear them for a few nights and then take them off and put them in the laundry and get out a clean pair.

One Saturday night she is watching TV with her mother when she hears a car stop out front and the honk of a horn. Too curious to remain sitting, she goes to the front window and pulls back the curtain a little and peeks out. The car is stopped at the curb in front of the house next door, his house. The car is idling, its taillights gleaming in the darkness. The horn honks again and in a minute Cedric comes running out of his house and gets into the car and it speeds off.

Where is he going on a Saturday night and who is he going with? With this question burning in her mind, she can no longer concentrate on TV. Here she sits with her mother, while she should be the one going out having a good time on Saturday night. She feels lonely and left out, maybe even a little jealous.

“I feel all right,” Lynette says. “It must be something I ate.”

“Want me to fix you an Alka-Seltzer?”

Lying in her bed in the dark, she realizes she must be in love with Cedric Choke to feel so miserable just because she saw him leaving in a car with another person. Yes, she loves him. Absolutely she loves him, in ways she didn’t love either of her husbands. She believes he would feel the same way about her, if only given the chance. They are just so right for each other!

The next morning is Sunday. She sleeps late and when she wakes up she begins drinking vodka martinis instead of eating breakfast. While she’s enjoying the lightheaded feeling alcohol always gives her, she goes into the kitchen and sets about making oatmeal raisin cookies. While waiting for them to bake, she cleans herself up and puts on clean clothes and a little lipstick and rouge to make herself look more alive than dead.

When the cookies are done baking and have cooled long enough, she puts three dozen in a tin box in a nest of wax paper and closes the lid. After a couple more quick drinks, she makes her drunken way out the door with the tin of cookies and over to Cedric’s house and knocks on his door.

She is certain he’ll answer this time but it’s the mother. Well, never mind! She goes ahead with the words she had planned to say if he had answered the door.

“G-Good morning! I live next door. I just made some oatmeal raisin cookies. I have more than my mother and I can eat, so I wanted to know if you’d like to have some of them.”

“Who? What?” the old woman asks, squinting at her in the bright light.

“The what? What is it you’re selling?”

“I’m—I’m not selling anything. I’m giving you some freshly baked cookies I just made.”

“Well, I can’t eat cookies. I have the diabetes.”

The old woman takes the tin of cookies and looks at it curiously. “How much are they?” she asks.

“I’m not selling them,” Lynette says. “I’ve giving them to you.”

“I could give you a couple dollars.”

“We haven’t been properly introduced.”

“He’s busy right now and can’t come to the door.”

She peers around the old woman into the interior of the house. When she hears a man’s voice coming from another room, she pushes past the old woman.

She continues toward the back of the house until she lurches into the kitchen. Cedric is sitting at the table. He stands up and looks at her, a startled expression on his face. He is wearing a green robe and his legs are bare.

Lynette runs to him, enfolds him in her arms and puts the side of her face against his chest. “I’ve wanted to meet you for so long!” she says.

“Who is this?” he asks his mother, standing in the doorway.

“I don’t know,” she says. “She said something about cookies. She’s crazy, if you ask me!”

“I’m not crazy,” Lynette says. “I haven’t eaten all day and I’ve had a little too much to drink is all.”

She wraps her arms around his head and kisses him passionately on the mouth. He tries to step back, takes hold of her wrists and pulls away from her grasp.

With those stinging words, he gives her a look of contempt and goes out of the room.

“I didn’t think you knew him!” the mother says.

“I’ve made a complete fool of myself, haven’t I?”

“If you don’t get out of my house in about two seconds, I’m going to call the police!” the mother says.

She takes a step toward the doorway and her legs buckle under her. On her hands and knees, she vomits violently all over the black-and-white tile floor.

“Now look what you’ve done!” the mother says. “Now I’ve got a mess to clean up!”

She starts to stand up and slides in her vomit. Her face hits the floor.

“I want you to know I don’t ordi-ordinarily behave in this manner,” she says shakily. “I haven’t quite been myself lately.”

The mother reaches down to help her to stand up, but she waves her away. As she is pulling herself to a standing position on her own power, she feels a wetness down her front and she realizes she has inflicted upon herself the ultimate indignity.